Customs in 5 cities to clear cargo for Shanghai 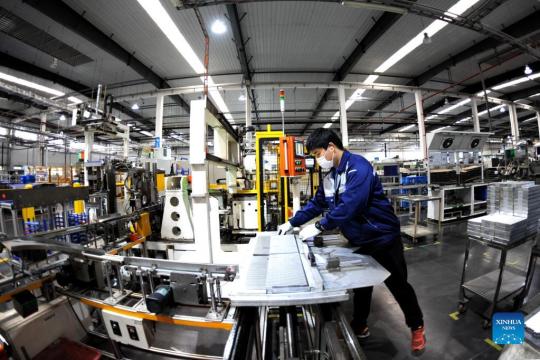 Customs authorities in five major cities in the Yangtze River Delta region－Shanghai, Nanjing, Hangzhou, Ningbo and Hefei－have adopted mutual recognition of each other's clearance processes for cargo related to companies on Shanghai's white list of businesses that can resume operations.

"We've also guided the enterprises to make use of 'land-to-water' and 'land-to-rail' transshipment modes to accelerate the transportation of goods across Customs areas," Liu said during a news briefing.

The measure is expected to help alleviate the pressure on road transportation caused by the epidemic. Through this service, customers can first transport containers to Taicang Service Center before transferring them by ship to Shanghai Port. This service will also divert road transportation needs to waterways to ensure the smooth operation of logistics channels during the pandemic.

Customs data showed that the freight volume and foreign trade (import and export) value at Shanghai ports have gradually stabilized and recovered since late April.

"To facilitate the resumption of Shanghai's key industries－integrated circuits, biomedicine and automobile manufacturing－Customs authorities will integrate moves, including opening green channels and reducing spot inspection rates, to give priority to such enterprises in appointment, review, inspection and release," he said.

The scope of such facilitation measures has expanded from key enterprises to the upstream and downstream of the industry and supply chain, and the coverage of commodities has expanded from finished products to raw materials, intermediate products and related manufacturing equipment, according to the Customs.

"For the COVID-19 vaccines, therapeutic drugs, and other anti-epidemic materials, we'll accelerate the procedures for health and quarantine approval," said Liu.

Shanghai registered 96 local COVID-19 confirmed cases and 759 asymptomatic infections on Tuesday. All the infections were found among quarantined sections of the population in areas under lockdown.

In the city of 25 million, the number of residents under lockdown has continued to shrink and reached 790,000 (or around 3 percent), said Zhao Dandan, deputy director of the Shanghai Health Commission.