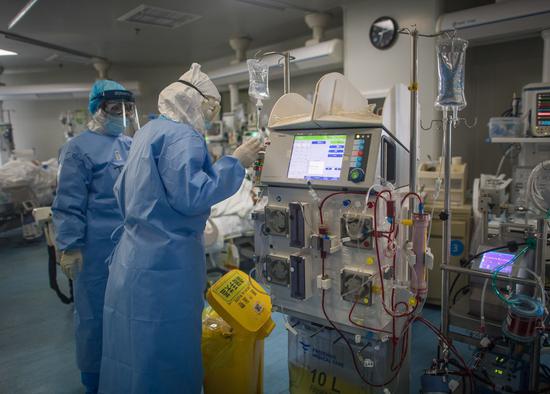 Four years ago, after returning from abroad, Chinese entrepreneur Liu Yang and her husband started a business manufacturing medical machines that offered a chance of life to people who would otherwise have died.

In recent months, the English acronym for these machines has appeared often in Chinese media. Stories of critically ill COVID-19 patients who have survived on ECMO devices make front-page news, where it is hailed as a "miracle machine."

ECMO, of extracorporeal membrane oxygenation, is a technique that provides prolonged cardiac and respiratory support to patients whose heart and lungs are unable to work.

ECMO was previously commonly used in open heart surgery, but its use has skyrocketed during the COVID-19 pandemic. Though very expensive and labor-intensive, it is widely viewed as a last-ditch treatment. Studies have shown that ECMO can greatly reduce mortality in critically ill COVID-19 patients.

Currently, China's ECMO machine market is dominated by one U.S. and two German brands. According to the Ministry of Industry and Information Technology, 67 ECMO machines were sent to treat severely ill COVID-19 patients in Hubei Province in March, and 29 were bought from abroad as an urgent need.

"We will do whatever it takes as long as there is a glimmer of hope," said Wuhan surgeon Dong Nianguo. In May, one of his COVID-19 patients received a double-lung transplant after 73 days of ECMO therapy and survived.

The record was broken in August by a 62-year-old COVID-19 patient in Guangzhou who survived on ECMO for 111 days.

"I was very impressed by the efforts to save lives at all costs, and I was aware that our company has a social responsibility too," said Liu, chairman of Chinabridge Medical Group, a Chinese ECMO machine manufacturer.

Over the past four years, Liu's company has been at the forefront of China's development of core parts of the machine, including the oxygenator and centrifugal pump, which function as an artificial lung and an artificial heart. Some have been patented globally. She plans to conduct clinical trials in two years.

Liu and her husband Li Yijiang spent 16 years in Germany and returned to Shenzhen in 2016. A heart surgeon at Shenzhen Hospital of Southern Medical University, Li believes the use of ECMO is necessary, but many local hospitals do not have it.

ECMO is rare across China. A few hospitals imported ECMO machines after the SARS outbreak in 2003. According to the Chinese Medical Doctor Association, about 400 ECMO machines were used in 260 hospitals at the end of 2018.

The high cost of ECMO is generally unaffordable. An imported machine is priced from 1 million yuan (149,800 U.S. dollars) to 3.5 million yuan. It includes a complex circuit of pumps, tubes, filters and monitors. Generally, the cost of two weeks of treatment is 100,000 yuan.