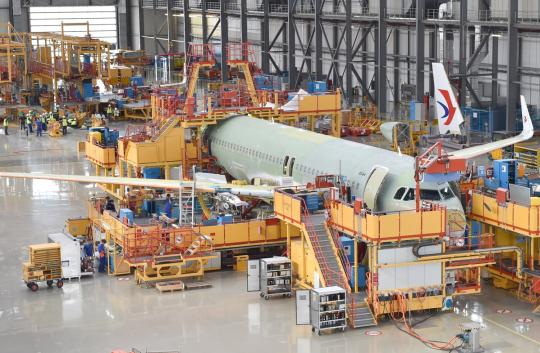 The final assembly line of the Airbus A320 in Tianjin. [Photo/Xinhua]

China is the first major market where Airbus SE, the European plane maker, has seen a recovery in demand since the novel coronavirus epidemic, according to a top company official.

"We plan to deliver 100 aircraft to Chinese carriers this year and hope that the volume will account for 20 percent of our shipments globally," George Xu, CEO of Airbus China, said in an interview with China Daily.

"The next few months will be a challenging time for Airbus as it races to meet the delivery goals in China and the Tianjin plant will work at full capacity to meet the requirements," he said.

The Tianjin facility, which has been in operation for more than a decade, serves as the first final assembly line of Airbus for single-aisle aircraft and the first completion center for widebody aircraft outside Europe.

Lin Zhijie, an aviation industry analyst and a columnist with Carnoc, a leading civil aviation website, said that given the current situation, the China market is more important to Airbus, and there is more room for growth. "The epidemic is basically getting under control in China and the Tianjin facility has fully resumed production. Aircraft deliveries to China will return to a regular level gradually," he said.

"The overseas air travel market has recovered to only 40 percent to 50 percent of the pre-pandemic level, and there is still a long way to go. Besides, the grounding of Boeing B737 MAX aircraft and the uncertainties over Sino-US relations could be an unprecedented growth opportunity for Airbus. And Airbus could even gain an overwhelming advantage if it seizes the chance," Lin said.

Xu from Airbus said despite the epidemic, the supply chain must not be disrupted. It has been in close touch with the supply chain in China to ensure a smooth adaptation, and the local government of Tianjin has supported the same. The Airbus facilities in Tianjin were one of the branches that recovered the fastest and the earliest.

"China plays an important role in Airbus' supply chain and is a critical force of scientific innovation. There are many competitive Chinese enterprises in the field of artificial intelligence and digitization. Airbus hopes to cooperate with them," he said.

China's domestic air travel market is steadily picking up. Since August, the number of scheduled flights in the domestic market exceeded 13,300 daily, and the number of available seats exceeded 2.2 million daily, both numbers reaching nearly 80 percent of the levels recorded last year, according to the Civil Aviation Administration of China.

Separately, Airbus has seen a growing demand in the air cargo market. It is frequently communicating with freight transport companies in China, and discussing what kind of aircraft can meet their demand in terms of performance, efficiency and costs, Xu said.

Air cargo is playing an increasingly important role in the fight against COVID-19, as a substantial number of passenger aircraft have been grounded. Eastern Air Logistics Co, the freight unit of Shanghai-based China Eastern Airlines, has converted more than 10 widebody passenger aircraft into cargo carriers.

As an important player in the aviation industry chain, Airbus has also been hit hard by the pandemic. The company has taken various measures to survive, including striving for credit support of 15 billion euros ($17.8 billion) and slowing down aircraft deliveries.

It is also planning to lay off 15,000 people globally and has canceled some less important investment projects to ensure that the cash flow will support smooth production. So far this year, Airbus has received confirmed orders of more than 300 aircraft globally. Last year, it received 768 confirmed orders globally.