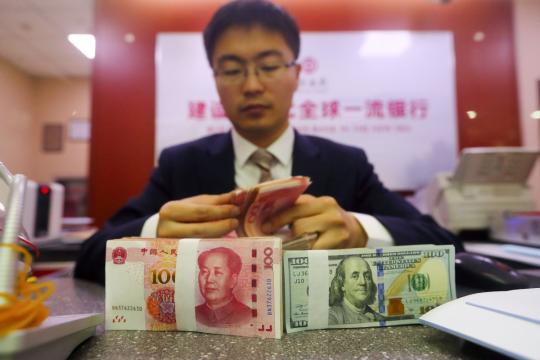 Global investors traded record volumes of Chinese bonds during the first three months of this year amid the novel coronavirus outbreak and the quest for safe haven investments with nominal yields and a relatively stable currency, analysts said.

During the first quarter of this year, foreign institutional investors invested 59.7 billion yuan ($8.42 billion) in China's interbank bond market. By the end of March, 822 foreign institutions held bonds worth 2.26 trillion yuan, the People's Bank of China, the central bank, said on Sunday.

Though most of the emerging economies saw record capital outflows due to the epidemic, demand for China's sovereign yuan-denominated bonds continued in April.

Purchase of these instruments soared to 2.28 trillion yuan by Monday, according to data from Bond Connect Co Ltd, a Hong Kong-based entity providing services that allow investors from the mainland and overseas to trade in each other's bond markets.

Market volatility in overseas financial markets shook up traditional safe haven investments, such as the U.S. Treasuries and dollar-denominated assets, in March. On the contrary, yuan-denominated bonds, especially those issued by the Chinese government, remained relatively stable, analysts said.

Yields for the 10-year Chinese government bonds stood at 2.6 percent on Friday. Although the bond value has dropped due to the domestic monetary easing cycle, it still remains higher than the equivalent U.S. Treasury yield of 0.59 percent, a historic low.

The U.S. Federal Reserve's near zero policy rate and its unlimited securities' purchase plan had prompted a rally in U.S. Treasuries this year and increased the gap between the two countries' benchmark bond interest rate. Global investors subsequently increased their exposure to Chinese debt instruments.

Liu Feng, chief economist of China Galaxy Securities, believes that China still has enough room to use the interest rate as a monetary policy tool. "Yields of yuan-denominated assets are still more attractive for overseas investors when compared with U.S., European or Japanese bonds, yields of which are approaching negative rates."

Though most of the major currencies have shown large fluctuations due to the capital market turmoil, the onshore yuan was only a tad weaker against the greenback, thereby increasing the attractiveness of yuan-denominated bonds, analysts said. When the U.S. dollar index rose sharply by 8.9 percent from 94.6 on March 9 to 103 on March 20, amid a global liquidity squeeze and U.S. dollar shortage, the yuan lost 2.4 percent against the U.S. dollar, the smallest fall among major currencies, the PBOC said.

Louis Kuijs, Head of Asia Economics at Oxford Economics, said the yuan's resilience has largely been due to the PBOC stance and resumption of economic activity in China.

"The PBOC has eased monetary policy much less aggressively than the U.S. Fed. In China, life is gradually returning to normal, while most of the other countries are seeing a slump in economic activity due to lockdowns. We expect the onshore yuan to be relatively stable against the U.S. dollar for the rest of the year, before showing some appreciation," he said.

The total value of China's bond market stood at 103 trillion yuan in the January-to-March period, up by 4 percent from the end of 2019, and was the world's second-largest after the United States, according to data released by the PBOC on Sunday.

Miranda Zhai, an analyst with Moody's Investors Service, a global ratings agency, expects bond issuances to increase this year. "Government and corporate bond issuances will soar further and exceed the 9.7 trillion yuan mark seen in 2019. In addition, the central bank is ramping up monetary easing measures to ensure sufficient liquidity in the financial system."

The PBOC said on Friday that it would cut the interest rate on the excess reserves deposited by financial institutions, from 0.72 percent to 0.35 percent. The cut, to be effective on Tuesday, is the first since November 2008.

"That is significant, and we expect further monetary easing as the inflation pressure subsides in the coming months－further reserve requirement ratio (RRR) and loan prime rate (LPR) cuts or even a benchmark deposit rate cut," said Hong Hao, chief strategist at Bank of Communication International Holdings.