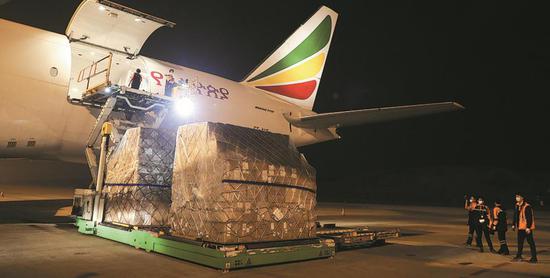 A cargo flight, chartered by logistics provider Cainiao Network Technology, is loaded with COVID-19 prevention and detection equipment for Africa in Guangzhou, Guangdong province, over the weekend. (Photo by Niu Jing/For China Daily)

Logistics companies in China are planning to expand their international cargo operations and charter flights for air cargo shipments to cope with the growing air traffic suspensions across the world due to the novel coronavirus outbreak.

Buoyed by the government's statement that it would extend policy support for the sector, the carriers are considering such moves to reduce cargo inventories after the outbreak curbed air travel in most parts of the world. Cancellation of passenger flights means the loss of valuable cargo space in aircraft for logistics firms, according to AirSavvi, a leading global travel data intelligence company.

Data collected by the company suggested that the trend is changing as just 23 percent of the international air cargo was transported via passenger aircraft on March 18. The rest of the cargo will be delivered by cargo aircraft, indicating a steady decrease in the weightage of passenger aircraft in cargo transport.

"Though passenger traffic has been virtually stopped to prevent the spread of the epidemic, it does not mean that the global supply chain should be halted, especially for shipment of critical resources," said Chen Zhuo, a senior analyst with China Merchants Securities.

Meanwhile, five new international cargo routes have been launched so far this month by Shenzhen headquartered SF Airlines, the freight operator under SF Express. These include flights between Shenzhen and Osaka, Shenzhen and Kuala Lumpur, Wuxi of Jiangsu province and Singapore, Shanghai and Tokyo, as well as Hangzhou of Zhejiang province and Bangkok.

Cainiao said it is one of the few companies that have not been affected by the epidemic, and its services are running normally in more than 100 countries and regions in the world.

With epidemic spreading rapidly overseas, airfreight logistics will not only ensure the transport of anti-epidemic materials, but also act as the lifeline of global industrial output, said Yang Daqin, a researcher with the China Society of Logistics.

According to Yang, China is the world's largest producer of epidemic prevention resources as well as an integral part of the smartphone supply chain.

"China can make good use of aviation logistics companies to restart operations and supplies to economies affected by the outbreak," said Yang.

Air cargo enterprises have also been encouraged to restructure with their logistics counterparts, so as to form a comprehensive express industrial network at home and abroad.

"Our company's production capacity has been restored to 90 percent, but products heading overseas in early March have been stockpiling in China due to suspension of flights by many European countries," a cross-border seller who goes by the name of Penny told ThePaper.cn. He said that his company's orders are likely to be canceled by overseas consumers if the logistics company fails to make the shipment.

"The plan is that our intelligent technology could match products waiting for delivery and aircraft with cargo transportation capacity available, and work efficiently within our network," said Zhao Jian, general manager of Cainiao Network Technology.

In order to facilitate cross-border trade amid global economic pressure, the company said it has launched dedicated flights from Chinese cities like Hangzhou, Hong Kong and Harbin to multiple international destinations such as Moscow, Tel Aviv and Liege, Belgium.

The company currently operates 20 international cargo flights on a weekly basis and delivers 18,572 metric tons of cargo (imports and exports) per week. In addition, SF Express is about to open more international routes in the next two months as more enterprises seek to resume businesses.

Despite the increased capacity, there remains a 69-percent capacity gap when comparing the actual cargo capacity of March 18 with that of Jan 17 (this year's peak), according to AirSavvi data.

Last year, 63.52 billion pieces of express parcels were delivered in China, with 1.44 billion pieces being delivered to places beyond the Chinese mainland, up 29.9 percent on a yearly basis, according to the China Post Group.

China has become one of the largest growth engines for the international express delivery market. However, experts said multinational logistics giants have maintained their dominant position in international air cargo delivery.

US-based FedEx had 681 cargo aircraft in operation as of May last year, while DHL and UPS each own several hundred airplanes, dwarfing their Chinese counterparts. SF owned 58 cargo aircraft as of 2019, while YTO had 12.