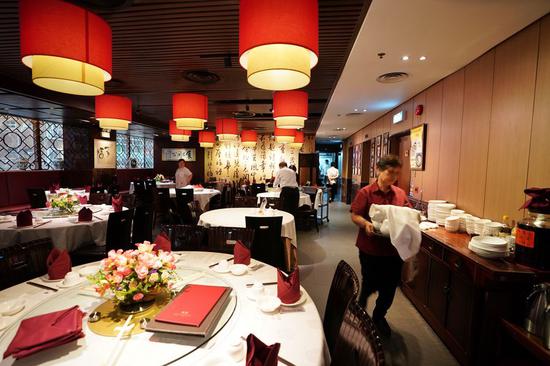 The total revenue of Hong Kong's restaurants sector in 2019 decreased by 5.9 percent from the previous year, the first annual decline in 16 years, according to statistics released on Wednesday by the Hong Kong Special Administrative Region (HKSAR) government.

For 2019 as a whole, the value of total receipts of the restaurants sector was provisionally estimated at 112.5 billion Hong Kong dollars (14.49 billion U.S. dollars), down by 5.9 percent in value and 8.0 percent in volume compared with the whole year of 2018, according to the HKSAR government's Census and Statistics Department.

A spokesman of the HKSAR government pointed out that it is the first annual decline in Hong Kong's total restaurant receipts since 2003.

The value of total restaurant receipts showed a steeper plunge of 14.3 percent in the fourth quarter of 2019 from a year earlier, marking the largest fall since the outbreak of SARS in the second quarter of 2003, the spokesman noted, adding that the local social incidents with intensified violence in the quarter caused severe disruptions to food and beverage businesses.

The spokesman added that the food and beverage sector has been facing an even more difficult business environment recently due to the threat of the novel coronavirus infection.

"The outlook down the road depends critically on how the situation of the novel coronavirus infection will evolve. The government will continue to monitor the developments closely," said the spokesman.