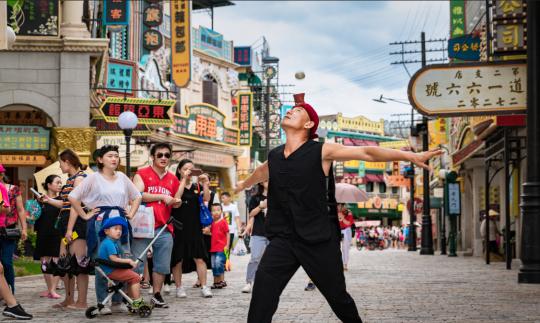 The town of Hengdian, where 70 percent of China's films and TV series are shot every year, is expected to make a strong comeback after having witnessed a decline in film activity owing to various factors, including competition from Shanghai and a tax probe across the entertainment industry.

Last year, more than 370 production units shot their films or TV series in the Hengdian Film and Television Industry Experimental Zone, located in the city of Dongyang, Jinhua, Zhejiang province, according to Zhou Fenglai, head of the Hengdian Actors' Union. "This year, only 30 units have undertaken on-location production until March."

According to him, the film crews prefer Shanghai, which has traditionally been known as the movie capital of China, for post-production work. It was the first Chinese city to have its own international film festival, which is today one of the biggest in Asia.

Shanghai Film Studio, one of the country's three major film production bases, is hugely popular because of the facilities it offers, he said.

Describing the plight of Hengdian, dubbed the world's largest film and TV series production hub, as "Growing Pains" - a reference to the American sitcom popular among TV viewers in China in the 1980s and 1990s - Zhu Guoqiang, deputy director of the administrative committee of the zone, said a total of 46 high-tech studies will be built within the zone.

First proposed in 2017, the government-funded studios, with a total investment of 3 billion yuan, are expected to be completed by September 2019.

Zhu said leading visual and creative studios have been invited to the zone to enhance Hengdian's competence in film production.

In his view, the challenge to Hengdian lies in having high-tech studios, advanced shooting facilities, besides digital post-production equipment, to make it a truly "Hollywood of China". The Hengdian World Studios, the largest movie studio in the world operated by the privately owned Hengdian Group, is referred to as the "Oriental Hollywood".

"It is true we have replicas of ancient palaces and buildings here, but that's far from enough," he said. The zone, launched in 1996, houses replicas of a number of ancient buildings, including the palace of Qin Shihuang, China's first emperor. These were erected as part of the film sets.

Ding Shanjun, president of Red Dot Film& Video Post-production Co.in Hengdian, feels that Hengdian should provide a favorable environment if it wants to attract best talent from around the world.

Ding's company, which was started in 2010, invested 50 million yuan in 2012 to build China's first three-dimensional digital film production studio. "When it comes to making films, especially science fiction and animation, high-tech production facilities and high-class talent are like two wings of a bird. You have to rely on both to enable it to fly higher," he said.

"Hengdian should be able to accommodate talent for the entire production chain, including shooting, post-production, and film promotion, and only then can it generate more revenues."

Shanghai too is not being complacent. Last month, officials from Songjiang District government in Shanghai announced that 60 studios, covering an area of 150,000 square meters, would be built in the city.

The subdued film activity has also been attributed to new laws aimed at regulating the sector.

Last June, the central authorities passed a law, according to which performers' pay should not exceed 40 percent of the total production cost, while remuneration to the leading cast members must be capped at 70 percent of the total payment for the cast. These rules applied not only to film productions, but also to TV as well as audiovisual programs on the internet.

Zheng Xiaolong, a Chinese People's Political Consultative Conference National Committee member and well-known director, acknowledged during the CPPCC National Committee annual session in March that more investors were "withdrawing their projects due to high risks" in the film and TV sectors. The CPPCC is China's top political advisory body.

An industrywide probe that emerged after Fan Bingbing, one of China's most famous actresses, was found to have evaded taxes to the tune of millions of yuan, is also said to have impacted the industry. Fan was fined 884 million yuan for tax evasion.

While the number of film shootings dipped, investors were focusing on low-budget internet films that were screened on Tencent, a web portal, and iQiyi, an online video-sharing platform, instead of cinemas.

However, Hengdian has continued to attract aspiring actors. The office of the actors' union, which handles the registration of 68,000 extras, still sees a big rush in the number of people looking for roles in either movies or TV series.