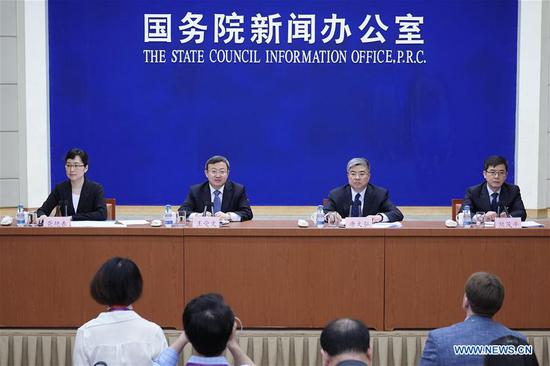 A press conference of the State Council Information Office is held in Beijing, capital of China, May 22, 2018. (Xinhua/Shen Bohan)

China is quickening preparations for the introduction of new practices to cut red tape for business filing and registration of foreign-invested enterprises (FIEs) as part of efforts to attract more investment inflows, authorities said Tuesday.

Starting June 30, China will adopt single form and one-stop services to allow FIEs to conduct business filing and registration online free of charge, without the need for paperwork or presence in person.

To get ready for the new rules, local authorities have formulated action plans and stepped up technical preparations, Vice Minister of Commerce Wang Shouwen disclosed at a press conference.

Since last year, Beijing has piloted the practice, which offered services to more than 600 businesses and has proved to be effective in cutting their costs, according to Wang.

The move came as China has been pushing for easier access for foreign investment, with an array of favorable policies rolled out this year.

According to a statement released after a State Council executive meeting earlier this month, China will streamline procedures for the establishment of foreign-funded companies in order to promote trade and facilitate investment.

Data showed China witnessed fast growth in new foreign-funded companies in the first four months this year thanks to those policies.

The number of new foreign-funded companies surged 95.4 percent year on year to 19,002 in January-April period, data from the Ministry of Commerce showed.