The first unmanned convenience store in Shanghai reopened on Wednesday after being forced to close temporarily as a result of hot weather.

A new air conditioner has been installed in the box-shaped shop - the first of its kind in the city - with sun umbrellas set up outside to prevent food items from going off in the summer heat, reported chinanews.com.

The unmanned shop was shut down last week after the air conditioner broke down. With Shanghai in the grip of high temperatures for the past few days, the temperature inside the box rose to 40 C. This lead to complaints from some customers that food items such as chocolate had melted.

The shop was launched in June by technology start-up BingoBox after months of testing the system in Guangdong province. It is one of two outlets run by the company in Shanghai. The other also closed due to an air conditioning problem. 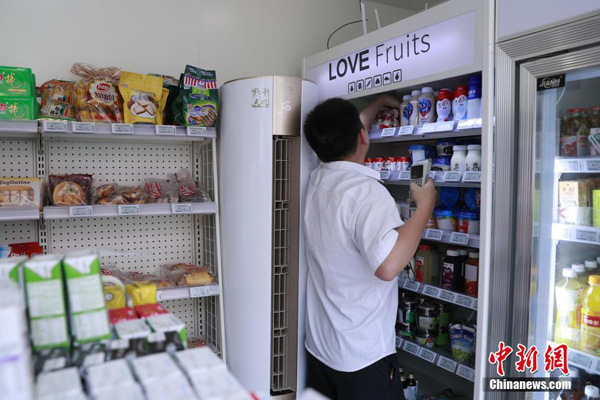 An employee stocks a refrigerator in the unmanned convenience store on Wednesday. (Photo/Chinanews.com)

The business relies on mobile phone technologies and facial recognition software. Customers first register with the company using their real identity. Once approved, the can enter by scanning a QR code at the door. Then, they choose the items they want, scan them at the cashier and pay through mobile phone payment tools.

A camera tracks customers and anyone who doesn't pay for items they take is recorded in the company's database.

There are eight outlets in total in Shanghai and Guangdong province, offering snacks and daily necessities at prices slightly lower than traditional convenience stores.