A technician inspects the surface of a stainless steel piece at a factory of Shanxi-based Taiyuan Iron and Steel (Group) Co, which is staking its future on its research and development efforts. ZHANG XUANYU / FOR CHINA DAILY

If you see Taiyuan Iron and Steel (Group) Co's recently attained capability to make domestic pen-tip steel for ballpoint pens as a sign of an exclusive focus on small things, you will be mistaken. The nation's top maker of stainless steel has decidedly big plans.

For one, TISCO is going global in line with the Belt and Road Initiative. For another, it is strengthening the supply of high-strength and high-end steel available for China's big-ticket projects, such as bullet trains, next-generation nuclear power plants and aerospace programs.

It is now a key cog in the massive manufacturing wheel that powers China's endeavors in industry and science.

As of March, TISCO started to supply stainless steel to Hualong One, the country's domestically developed third-generation reactor, adding one more name to the list of over 10 completed or under construction nuclear power stations that use TISCO-made stainless steel.

TISCO's high-end products also will shine on the global stage through integration with the Belt and Road vision of huge advances in infrastructure and trade, company officials said. TISCO-made materials are used in the China-Maldives Friendship Bridge, Temburong Bridge in Brunei, China-Russia and China-Myanmar natural gas pipelines, a nuclear power station in Pakistan and even for the coins cast in Malaysia, the Netherlands, Poland and Brazil.

For China's military forces, TISCO's materials have proved essential in making Dongfeng missile shells and the latest series of destroyers. It is the only qualified Chinese supplier of low-magnetic steel plate for warships and vessels, TISCO officials said in a statement released exclusively to China Daily.

The company's staff has worked hard to achieve technical prowess, particularly in research and development. It has further sharpened its competitive edge through R&D, officials at the Shanxi-headquartered company said.

In 2016, TISCO introduced more than 10 new products, which have garnered a more than 70 percent share of the Chinese market.

Its products have given a major boost to the country's aerospace industry, TISCO said. It made a number of components of the new Long March 7 Y2 rocket, which lifted China's first cargo spacecraft, Tianzhou 1, into orbit on April 20. Tianzhou 1 is the nation's largest and heaviest spacecraft.

According to the SOE's military and nuclear power business department, TISCO's high-end steel and iron have been widely used in China's crucial aerospace programs, including the Shenzhou spaceship series and the Chang'e lunar orbiters. Rocket engines use TISCO stainless steel that is resistant to high temperatures.

"With Tianzhou 1's launch behind us, we're set to supply essential materials for the International Thermonuclear Experimental Reactor, the world's largest and one of the most critical fusion experiments," the company said in a statement to China Daily.

All the moves would mark TISCO's heightened efforts to expand into the international market, its chairman, Li Xiaobo, said in a written interview.

"We need to move fast to figure out potential demand, and to design the best material for clients," Li told China Daily. "Simply following others isn't going to work. We'll provide optimized solutions to win the (world's) trust."

TISCO's next ambition is to become the world's most competitive stainless steel enterprise, Li said.

TISCO is further fine-tuning its alignment with visionary national campaigns such as the Belt and Road Initiative, the Made in China 2025 industrial upgrading plan, and the go-global drive of Chinese enterprises. In doing so, TISCO aims to serve high-end markets as well as burgeoning industries from a global perspective, Li said.

Zhao Ying, a researcher at the Institute of Industrial Economics, which is part of the Chinese Academy of Social Sciences, said when Chinese firms, particularly SOEs, seek to expand abroad, industrial innovation and long-term investment goals are key to maintaining earnings.

TISCO is allocating 3.5 percent of its annual sales to R&D and innovation, which could mean several billion yuan annually for leading-edge work. This is expected to help TISCO go from a traditional manufacturer to a digital-age global supplier of new products.

"TISCO needs to grab the opportunity presented by supply-side structural reform to expand its product catalog and enhance its competitive edge," Li said.

The company has set a goal to produce 4.5 million metric tons of stainless steel this year, the nation's largest amount. It also intends to top its peers in more than 20 high-end stainless categories, such as steel for aerospace ships and nuclear power reactors.

By the end of 2020, TISCO expects high-end and specialized steel to comprise 90 percent of its total production, with R&D expenses reaching 5 percent of annual sales.

The company said it made a major breakthrough this year by launching its duplex stainless steel products－high-strength steel with lots of chromium－in Europe's high-end materials market.

"In the past, we had to import steel to produce motors for new energy vehicles, which require extremely good quality," said Zhang Wenkang, chief engineer of TISCO's silicon steel mill. "Now, we've independently developed such material that also performs better in energy efficiency." 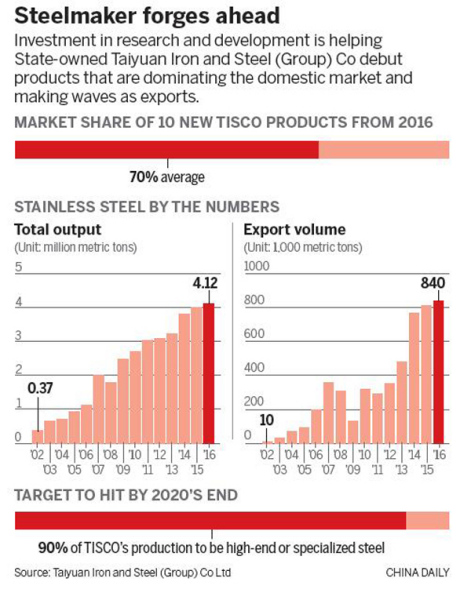