Say it with flowers, but now say it online 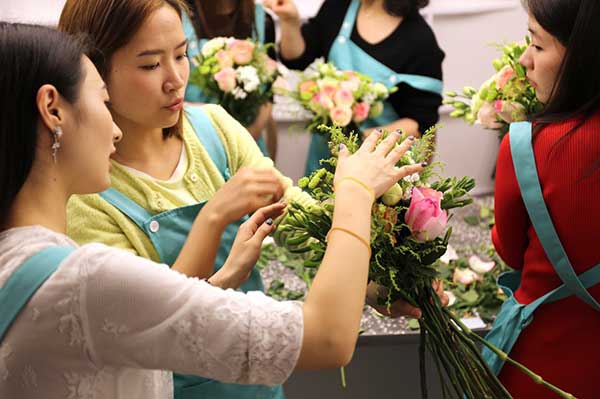 If you want to jazz up your home with fresh flowers, there's no need to wander the streets on the hunt for florists. These days all it takes is a quick click of the phone and a bouquet will arrive, on schedule and to order, every week.

These kind of services have become increasingly popular in cities like Beijing and Shanghai. Various online flower shops have rolled out their services on official WeChat accounts.

Consumers can pay with amounts ranging from 99 yuan ($15) to 598 yuan per month and a bouquet of flowers will be delivered at a designated time every week. With that deal, customers can receive four romantic and fresh bouquets of flowers through the month.

Beijing-based Huadian Shijian is an example of the trend. Clients can get a bouquet each week for a month for a minimum 99 yuan.

The flowers are ordered in advance and are scheduled for delivery on Saturday or Monday, a week later. That's based on the order amount and the availability situation at the company's production base, located in West China's Yunnan province.

Once the flowers are chosen for the weekly special, they're packed and flown to the firm's various branches all over the country within 24 hours.

Every week Huadian Shijian brings in more than 3 tons of flowers, and all of them are used. So waste is very limited and costs are minimized.

Physical stores, which sell flowers for more than 300 yuan or even 1,000 yuan a bunch, only choose flowers that are more widely accepted by consumers. Flowers such as roses and carnations, because they don't want the less popular flowers left to rot in their stores.

For consumers, freshness of flowers is of utmost importance.

To that end Huadian Shijian has chosen the country's leading courier SF-Express which promises successful delivery the very next morning.

It's considered more efficient than building up its own logistics system. In terms of design, the product box is designed to allow flowers to stand inside. Even if the box falls down, the bouquet won't tumble inside the box.

According to Zhu Yueyi, founder and chief executive officer of Huadian Shijian, WeChat helped to save a lot of cost at the start of her business, especially in terms of promoting applications. Since WeChat's monthly active user number remains at around 700 million people, the company can take full advantage of this huge group of users.

About 80 percent of Huadian Shijian's current users are female, which is in line with the company's original plan. What they had not foreseen is the rapid growth of users.

Huadian Shijian's first bunch of flowers went online in July last year. Its turnover had surged by 10 times by the end of April, without any promotions of its services. The monthly service has received the most repeat orders. The word-of-mouth effect is something that is helping with the growth, according to Zhu.

The contribution of women consumers is in line with findings from market consultancy Mintel's 2016 China Consumer Trend Report. With women increasingly independent in their personal and financial lives, Chinese women are creating a "Women Only" market, the report finds.