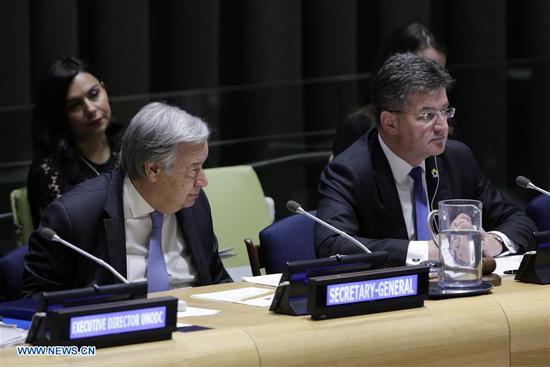 UN Secretary-General Antonio Guterres on Wednesday asked countries to root out corruption on the occasion of the 15th anniversary of the adoption of the UN Convention Against Corruption.

"The United Nations Convention Against Corruption represents the fundamental recognition that corruption is neither an acceptable cost of doing business nor a necessary evil. It is a serious crime, and simply unacceptable," he told a General Assembly high-level debate to mark the 15th anniversary of the adoption of the convention.

Corruption affects developed and developing countries alike, and complicity knows no borders. Those who can least afford corruption suffer the most, said Guterres. "It cripples economic development, stifles entrepreneurship and deters investment."

Society cannot function equitably and efficiently when public officials -- from doctors to police, judges and politicians -- enrich themselves rather than perform their duties with integrity.

He urged member states to use the convention as a platform to mobilize political and popular support for the fight against corruption. "It is the world's most agile instrument in the hands of the international community to achieve our common goals of good governance, stability and prosperity."

If governments are serious about doing the best for their citizens, then pledges to promote integrity and clamp down on corruption must be more than campaign promises and words on paper, he said. "I make an urgent call to our global leadership to take a moral stand and install a culture of integrity from the top down. It all begins with setting an example."

By tackling corruption, governments can show they mean business, he said.

Corruption robs funds from schools, hospitals, infrastructure and other vital services. Human trafficking and migrant smuggling, illicit financial flows and illegal trade in natural resources, weapons, drugs and cultural heritage are all made possible because of corruption. It fuels conflict, and when a hard-won peace is achieved, corruption undermines recovery, noted the UN chief.

Corruption and impunity are corrosive, breeding frustration and fostering further corruption when people see no other way of achieving their goals. A sense of desperation before the real and perceived lack of opportunities also fuels the large movements of people seeking better prospects. And the lack of opportunities for young women and men, often exacerbated in corrupt societies, can feed into the cynical narratives of terrorists and violent extremists, he added.

For 15 years, the UN Convention Against Corruption has served as an international framework for cooperation to strengthen prevention and mitigate corruption risks, said Guterres. "It helps disrupt money laundering and stop the illicit outflow of funds. It contributes to the return of stolen proceeds from foreign banks. And it enrols in civil society and the private sector as essential partners."

Since its adoption, the convention has achieved near-global acceptance with 184 parties, he noted.

Full implementation of the convention is needed to put an end to the threat that corruption poses to development. Such responses are critical to provide fair opportunities and facilitate investment, tackle transnational organized crime, prevent the unfair influence of powerful interests on governance and safeguard civil and human rights, he said.

Guterres said the United Nations can play a crucial role in helping members states fight corruption. "There are several ways the organization can support member states to combat corruption, from sharing good practices to supporting the capacity of national anti-corruption institutions."

The United Nations will continue to support member states every step of the way, from helping to engage and empower citizens in this fight, to helping build and enhance institutions that can deliver on their promise, he said.