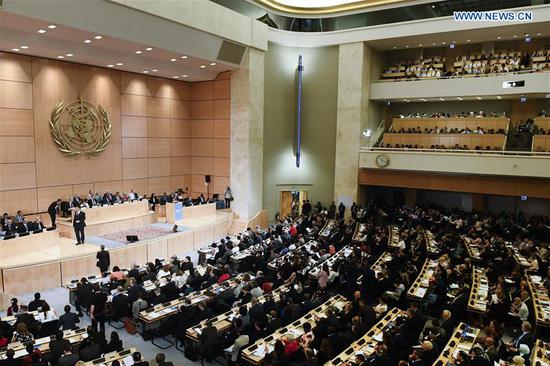 Delegates attend the 71th session of World Health Assembly (WHA) in Geneva, Switzerland, on May 21, 2018.

China on Tuesday welcomed the World Health Assembly's (WHA) decision not to include a proposal to make Taiwan an observer in the conference's provisional agenda.

This year the WHA has refused to include the so-called proposal of "inviting Taiwan to attend the WHA as an observer" in the conference's provisional agenda, Foreign Ministry spokesperson Lu Kang told a news briefing.

This decision safeguarded the dignity of the relevant resolutions of the UN General Assembly and the WHA, which fully proved that the one-China principle is the consensus of the international community and corresponds with the trend of the times, he said.

"I would like to reiterate again that the Chinese government will properly handle the issue of Taiwan's participation in the activities of international organizations in accordance with the one-China principle," Lu said.