People stand outside Canterbury Auction Galleries on Wednesday after the sale there of a bronze water vessel, known as the Tiger Ying. （Photo/China Daily）

A bronze relic believed to have been looted from the Old Summer Palace in Beijing in 1860 sold at auction in Canterbury, Kent on Wednesday for 410,000 pounds ($582,000) in an auction in Kent, in the south of England.

The water vessel, dating from the Western Zhou Dynasty (1100-771 BC), was sold at The Canterbury Auction Galleries despite protests from China's State Administration of Cultural Heritage ( also known as SACH), which said that it strongly opposed and condemned the sale of looted property.

China's national cultural relics watchdog demanded the item be withdrawn for sale and called for buyers to boycott the auction.

Despite China's objections, the sale of the Tiger Ying, named because of its tiger decorations, went ahead with the opening bid at 120,000 pounds. There were around eight telephone bidders and the hammer came down at four times the estimate.

It is thought that only six similar vessels, known as ying, exist and five of those are in museums.

Hajni Elias, a Chinese art and cultural historian who helped research the origins of the Tiger Ying, described it as "special and unequalled".

"We cannot underestimate the wealth and sophistication of the late Zhou culture that created such an outstanding bronze vessel," she said. "Only men of high status, such as kings, his nobles and officials were able to obtain them."

Documents discovered by The Canterbury Auction Galleries suggest that Royal Marines Captain Harry Lewis Evans (1831-1883) took the vessel from the Imperial Palace, also known as the Yuanmingyuan, at the end of the Second Opium War, when it was destroyed and sacked by British and French troops in 1860.

In the letters, Evans described the looting of the Yuanmingyuan and also wrote, "I succeeded getting bronzes and enamel vases that will, I hope, some day find their way to [his home in UK]." 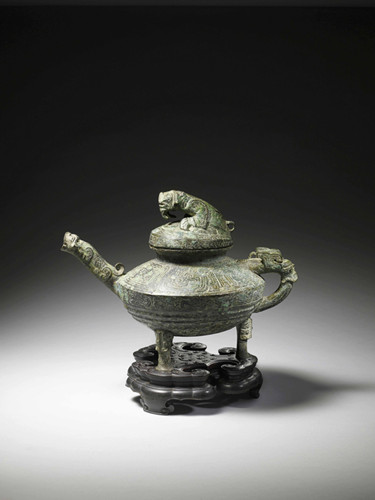 The Tiger Ying bronze vessel that was sold at the auction in Canterbury, Kent, for 410,000 pounds ($582,000). （The Canterbury Auction Galleries/For China Daily）

The auction house also sold three Qing Dynasty bronzes from the Evans collection for prices between 9,000 and 15,000 pounds.

The ransacking of the Old Summer Palace has been described by Chinese academics as a symbol of shame for people in China for many years.

In a statement last week, SACH said: "We hope the related institutions will abide by the spirit of international agreements, respect the feelings of the people in the country where the relic is originally from and not trade looted relics."

The government agency has yet to comment on the sale.