Deputies to the NPC and members of the CPPCC National Committee attend the two sessions in Beijing. (Photo/China Daily)

New faces often bring fresh ideas and new thoughts. The newly elected deputies and members to this year's two sessions have been put under the spotlight.

Official data show that about 75 percent of 2,980 deputies to the 13th NPC are newcomers, while half of the 2,158 members attending the 13th National Committee of the CPPCC are first-timers.

Participants in China's top legislature and top political advisory body are elected every five years. This year, the annual CPPCC session concluded on Thursday and the NPC session ends on Tuesday.

Compared with the 12th NPC, which served from 2013 to 2017, the proportion of female deputies and those from the grassroots level have increased, while the proportion of deputies who are officials has declined. Also, there are more deputies born in the 1990s.

This year, for example, the Beijing delegation to the NPC has 54 deputies, 38 of whom, or almost 70 percent, are new faces. Many of them are front-line employees, including a judge, a doctor, a technician and a security guard.

Meanwhile, the number of deputies from ethnic groups has increased to 438 this year from 409 at the 12th NPC, while the percentage of deputies engaged in professional industries also has gone up.

Liu Faying, 48, a primary school principal from Hubei province, is a new NPC deputy. She said what she cares most about is rural development and how to provide better education to rural areas.

"A village's future depends on talent, but now lower education and insufficient educational resources are still big gaps with those in cities," she said.

Although it is the first time she has participated at the NPC annual session, she brought four suggestions on how to improve the quality of education in villages and is willing to speak about them in discussions.

Hou Zhanying, 35, a new NPC deputy from Beijing, said she prefers learning from senior deputies at first, "because everything in the session for me is brand-new, which makes me a little bit anxious."

Hou said being a good deputy is not easy. She received training and had some classes organized by the NPC Standing Committee before the session. The training helped her understand more about what the NPC is, what a deputy should do and how to be a qualified lawmaker during the next five years, she said.

According to the NPC Standing Committee, all new deputies are given their "first lesson" ahead of the session, which this year opened on March 5. They were required to learn basic knowledge of the legislature and laws, as well as brush up on economics and budgeting.

Training NPC deputies started in 2005. Between 2013 and 2017, the period of the 12th NPC, its Standing Committee organized 22 such classes to educate deputies about 5,520 times, sufficient to train each new deputy at least once or more.

The 12th NPC Standing Committee said its goal was to satisfy the study demand of grassroots deputies, making sure each was trained at least once.

Xie Rirong, deputy director of the NPC training center, said: "Our training is organized and well planned, as it is to let deputies know what political affairs take place as well as what responsibilities they should shoulder and what duties they should have." 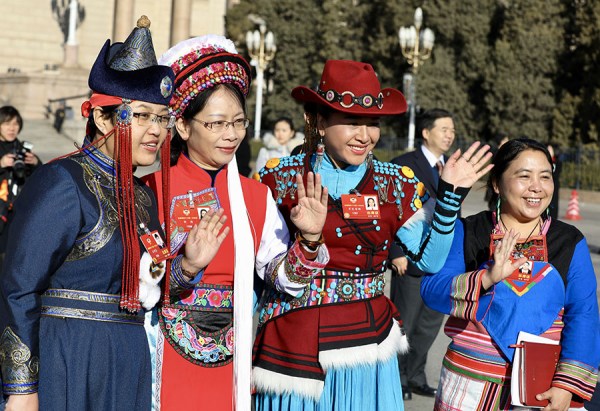 Deputies to the NPC and members of the CPPCC National Committee attend the two sessions in Beijing. [Photo/China Daily]

Galsang Dekyi, 40, a new NPC deputy from the Tibet autonomous region, said she received training organized by the regional People's Congress before coming to Beijing to attend the annual session. During the training sessions, she was given instructions on how to conduct research and draft suggestions.

"I can do a lot more for Tibetan people as an NPC deputy. The training also helps me understand the weight of my suggestions, which I take very seriously," Galsang, a primary school principal from the Monba ethnic group, said.

She was elected as a poll observer when the deputies voted on the Constitutional amendment on Sunday."As I watched deputies casting their votes one by one, I realized that what we do is so important to China's future. I voted on behalf of the Tibetan people and people from the Monba ethnic group," Galsang said.

There has been a lot on the agenda this year, including making decisions about the Constitutional amendment and the institutional reform plan of the State Council, but Galsang said she has been prepared. "There are many supporting documents explaining the changes, so I am sure I can make the right decision."

The CPPCC has similar training. It also has been delivering news and political advisories to its members through text messages once a week since last year.

The 12th CPPCC provided training or seminars to political advisers three times, and 878 members in all attended, according to the political advisory body's official newspaper.

For deputies and members, training and learning are ongoing activities, no matter who is new or more experienced. Only when they fully understand their responsibilities and how to execute their powers, according to official websites from both bodies, can people's opinions be better addressed and actions taken to make their lives better.