As the eighth excavation of the Tuyugou Grottoes in Northwest China's Xinjiang Uyghur Autonomous Region finished up in January this year, archaeologists from the Chinese Academy of Social Sciences and Academia Turfanica unearthed a surprising discovery that has helped shed some light on the history of the famous Tang Dynasty (618-907) monk Xuanzang (602-664).

Known by many as the monk in the classic Ming Dynasty (1368-1466) novel Journey to the West, Xuanzang was actually a real historic figure upon which the character in the novel was based. The founder of Dharma-character school and one of the three greatest translators in Chinese Buddhist history alongside Kumrajva and Paramrtha, he is also famous for his incredible pilgrimage to India in the 7th century.

Xuanzang was born during the Tang Dynasty, a time period known for its open and free atmosphere. Xuanzang grew to become a master of Buddhist studies, but found himself in the middle of an academic controversy since schools in the north and south of China had widely different versions of Buddhist sutras. To find a way to bring all the different factions together, Xuanzang departed from the Tang capital of Chang'an (today's Xi'an) heading west to India where he reached the Nalanda Monastery, an important center for Buddhist studies in the northeast of India.

After 17 years, in the country, he returned to China with numerous copies of important sutras to which he dedicated his life to translating into Chinese.

According to researchers of Xuanzang's route, he travelled more than 6,900 kilometers to fulfil his dream of studying Buddhism in India.

Returning to the archaeological excavation in Xinjiang, excavators discovered a large Buddhist text on a large piece of paper some 20 centimeters by 18 centimeters in size, the Buddhist script. While a portion of the paper had been damaged by the centuries, roughly 70 percent of it was still intact, a rare find for any archaeologist.

After a quick identification by experts, this script was soon recognized as being a Chinese copy of the Mahaprajnaparamita Sutra, a classic sutra written around the 1st century BC.

More excitingly, a line at the beginning of the text shows that the sutra was translated by none other than Xuanzang himself on orders of Emperor Taizong (598-649).

While the content of the sutra may have been a Xuanzang translation, there is no way to determine if the characters on the page had been written by the monk.

"There is no evidence that proves this particular sutra was written by Xuanzang," explained Xia Lidong, a professor with the Chinese Academy of Social Sciences.

"Many places carried out translation work and many people were hired to make copies of sutras in Chang'an and Liangzhou [Northwest China's Gansu Province]. It is possible this sutra is a copy written by one of the staff at a translation center."

In addition to the sutra, more than 150 fragments of paper with sutras were also unearthed at the location.

According to Xia, the sutras must have been written by professionals since the "characters were written carefully and beautifully." 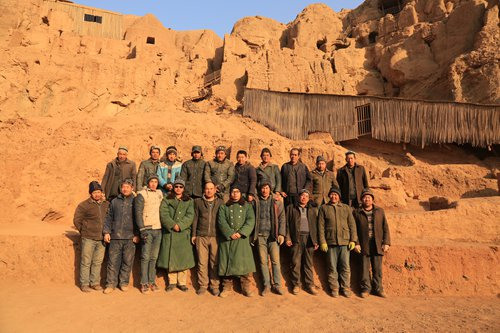 Archeologists at the Tuyugou Grottoes site pose for a picture. (Photo/Courtesy of Xia Lidong)

Another important discovery was made in the southeastern portion of the cave system that makes up the grottoes.

The remains of an old monastery, the Ding Gu Monastery, were found in two caves. In addition to the remains of lime covered walls, more sutra fragments were discovered with writing in both Chinese and Uyghur along with Uyghur coins, textiles, wooden building materials and some non-religious texts.

Among all these texts, a contract has caught the attention of the archaeologists as it records the debt and transactions between the Ding Gu Monastery and other monasteries. This text makes for a great reference for scholars studying the economy of the time period.

"You can see the names of other monasteries as well, and they are all connected to the Ding Gu Monastery."

Xia also explained that the new discovery helps show the connections that existed between the Tang Dynasty and the western regions.

"We can learn a lot from this new discovery," Xia told the Global Times.

"All these unearthed relics provide a window that allows us to see how attitudes toward Buddhism was changing in the area. Plus, it gives us a framework for further study of the grottoes."