Premier Li Keqiang and Canadian Prime Minister Justin Trudeau meet the press after the second meeting of the Annual Dialogue between the Chinese premier and the Canadian prime minister in Beijing, Dec 4, 2017. (Photo/Xinhua)

China and Canada are willing to conduct feasibility studies toward a free trade agreement in an open and pragmatic manner, Premier Li Keqiang said after meeting with Canadian Prime Minister Justin Trudeau at the Great Hall of the People in Beijing on Monday.

Trudeau, who took office two years ago, is making his second official visit to China from Sunday to Thursday.

Li said the relations between the two countries are in a "golden age" and that they should further diversify cooperation because they share great complementary advantages.

"China stands ready for an open and candid discussion toward a free trade agreement with Canada, and both China and Canada are willing to jointly facilitate free trade and investment," Li said.

Trudeau called the dialogue "the best way to build a stronger and more comprehensive relationship". He said it is in the best interest of all Canadians to ensure that the country has a strong and stable relationship with China because "great market access to Canadian businesses means stronger business growth and more jobs for the middle class".

"Canada has always been a trading nation, but the landscape of trade is shifting, and we need to adjust to it," Trudeau told reporters. "If done properly, a trade agreement will bring benefits to both countries, creating jobs, strengthening the middle class, and growing our economies."

The two leaders reached agreement on various issues of common interest, such as jointly dealing with climate change and clean growth, and celebrating a China-Canada Year of Tourism in 2018.

They witnessed the signing of three cooperation documents, dealing with food safety, energy and educational exchanges.

On Monday morning, the 45-year-old Canadian prime minister made Sina Weibo headquarters the first stop on his five-day trip to Beijing, where he promoted tourism and met with a youthful crowd. He will head to Guangzhou, to the Fortune Global Forum, and meet with global business leaders to discuss ways to increase trade and attract international investments to Canada.

Trade volume between China and Canada grew by 13.5 percent year-on-year in the first half of 2017, according to the Ministry of Commerce. 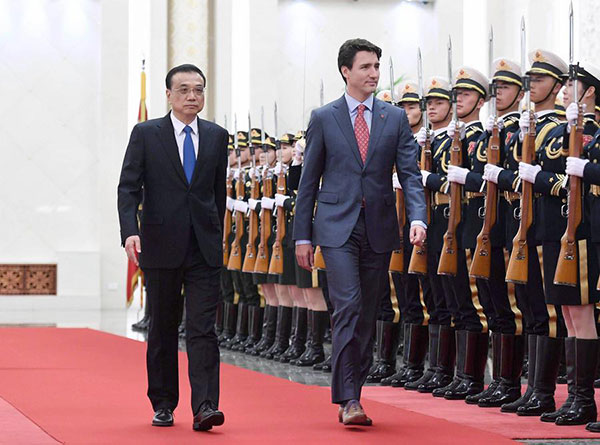 Premier Li Keqiang holds a welcome ceremony for Canadian Prime Minister Justin Trudeau before the second meeting of the Annual Dialogue between the Chinese premier and the Canadian prime minister in Beijing, Dec 4, 2017. (Photo/Xinhua)