High-tech companies in the limelight at Shenzhen expo

A water dispenser which can condense air moisture is seen during the 19th China High-tech Fair in Shenzhen, South China's Guangdong province, Nov 16, 2017. More than 3,000 exhibitors would show latest achievements in science and technology here on the fair which kicked off on Thursday. (Photo/Xinhua)

Have you seen a machine that transforms air into drinking water, a window membrane to protect your home from outside pollutants, or a battery that needs only 30 seconds to charge?

Innovative companies and technologies are the top draw for foreign delegations and visitors at the China High-tech Fair 2017, a State-level technology show that kicked off on Thursday in Shenzhen, Guangdong province.

More than 1,000 new products are being showcased at the fair that has attracted 3,049 exhibitors from all over the world. Some of the top global technology companies are also participating in the event, such as the 3-D robotic sorting system from Intel and the latest 5G solution from Huawei.

In addition, the fair also set an exhibition zone for early-stage startups for the first time this year.

Delegations from 35 countries and the European Union are seeking cooperation with China's innovative high-tech companies. 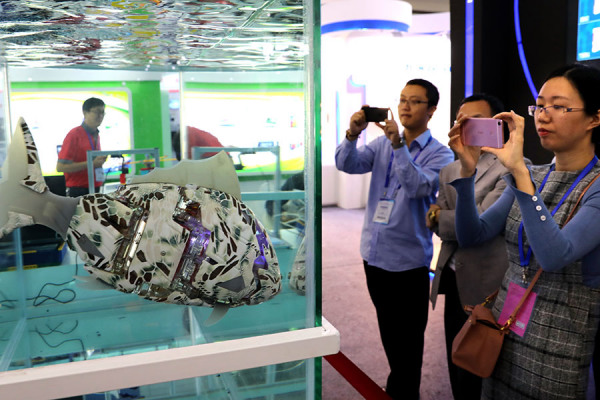 Visitors take photographs of an underwater robot in a tank at the China High-tech Fair 2017 held in Shenzhen, Guangdong province, on Nov 16, 2017. Xuan Hui / Provided to China Daily

The delegation from Argentina's La Rioja province, which is taking part in the event for the first time, signed a memorandum of understanding with China's leading new-energy carmaker BYD at the fair to purchase 50 electric buses. The Shenzhen-based company will also provide a package of new energy solutions, including electronic cars, e-trucks, solar panels, and energy storage systems.

Ruben Eduardo Galleguillo, minister of industry and planning of La Rioja, said "Argentina is a country with abundant agricultural and tourism resources, while China is advanced in technology. We hope to learn from and introduce Chinese technologies to our country while bringing our natural and cultural resources to China."

The province also signed an agreement with Chinese telecommunication company ZTE for smart city solutions at the exhibition.

"I am impressed by innovative products and technologies in the fair, such as facial recognition, virtual reality, IOT and robotics," he noted, "China is a beacon for Bahrain. Especially in Shenzhen, if we could emulate any small way what happened here, we would be very proud of that."

Several Chinese companies have already set up offices in Bahrain, such as Huawei, while companies in the e-commerce and online-gaming industry have charted plans to develop the market. Bahrain is also looking for Chinese investors to fund startups in the Middle East, he said.