China and the Philippines on Wednesday signed 14 cooperation deals as leaders of the two countries pledged to strengthen "positive momentum" in bilateral relations.

After meeting with Philippine President Rodrigo Duterte, visiting Chinese Premier Li Keqiang told the press in the Philippine capital of Manila that the Chinese-Philippine relations have improved and both sides hope to "work together to make up for the time that we might have lost." [Special coverage]

Li said Duterte's visit to China in October last year was an "ice-breaker" and he has come this time to carry forward the traditional friendship.

The leaders also announced the start of work for two river bridges in Manila and two drug rehabilitation centers in Mindanao, south of the Philippines.

Construction of the bridges will begin in 2018 and takes two and a half years to complete, officials said. The bridges will help ease Manila's severe traffic jams.

The drug centers, on the other hand, will be able to accommodate 300 people in total.

In his talks with Duterte, Li said the economies of China and the Philippines are highly complementary.

Cooperation strategies, spanning five to 10 years, in areas like infrastructure can be discussed and formulated to send out a message that the China-Philippines relations will continue to go forward, he said.

Li pledged 150 million yuan (22.7 million U.S. dollars) in grants from the Chinese government to assist the reconstruction of war-torn Marawi in the southern Philippines.

The Philippine government in October declared victory over Islamic State-linked extremists in Marawi, ending nearly five months of fierce fighting that left many parts of the city destroyed.

Li said he believed that under Duterte's leadership, the rebuilding of Marawi will be completed at a very early day and the local people will enjoy an even better life.

For his part, Duterte thanked China for aiding the Philippines in its takeover and rebuilding of Marawi and the assistance given to boost the Philippines' "Build, Build, Build" infrastructure development initiative.

"I am pleased to note the positive turnaround and vigorous momentum of Philippines-China relations," Duterte said. "Practical cooperation in many areas is bringing in an early harvest of tangible benefits."

He said the joint efforts to improve ties have secured peace, stability and development in the region.

In his meeting with Li, Duterte said the Philippines welcomes Chinese investment, and is looking forward to learning from China's development experience and strengthening cooperation in such fields as transportation, telecommunications and agriculture.

Duterte also said the Philippines is willing to play an effective role of a coordinator to boost China-ASEAN relations. 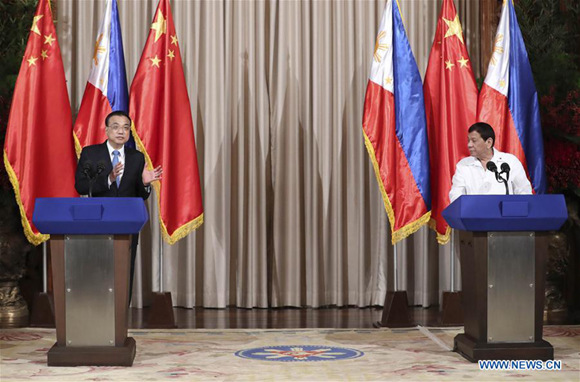