The United Nations Educational, Scientific and Cultural Organization (UNESCO) has awarded the UNESCO Medal on Space Science to first Chinese national sent to space, Yang Liwei, and three other prominent international space practitioners during the first edition of the award ceremony.

The ceremony was held on Friday evening at UNESCO's Headquarters in Paris.

The three other scientific laureates of the 2017 edition are Valentina Tereshkova, the Russian cosmonaut and first woman in space, Arnaldo Tamayo Mendez, the first Cuban in space, and Japanese astronaut Koichi Wakata, the first Japanese commander of International Space Station (ISS).

"I thank you all for your courage and commitment," said Director-General of UNESCO, Irina Bokova, to the laureates. "And I end with an appeal, for you to continue on your scientific journey, and also to return to UNESCO as often as possible, to reach out to younger generations, to share UNESCO's message to build peace in the minds of men and women."

Unable to attend the ceremony himself, Yang Liwei was represented by Shen Yang, Ambassador and Permanent Delegate of the People's Republic of China to UNESCO at the ceremony.

In a message delivered by Shen on his behalf, Yang Liwei recalled October 2003 when the world witnessed the success of China's first manned space mission that opened a new era of China's manned space program and made contributions to the human exploration into the unknown.

The Chinese astronaut noted that out of China's collaboration with the United Nations, a UN flag boarded the Shenzhou 5 aircraft during the 2003 space mission, a sign that has shown Chinese people's willingness to use the outer space for peaceful purposes and in the benefit of all mankind and demonstrated China's support to the UN's mission and principles.

"In the future, we are willing to work together with all countries and regions that are committed to the peaceful use of outer space, with an aim to contribute more to the promotion of scientific progress and peace and development of the world," he said.

The UNESCO Medal on Space Science, established on June 29, 2017 is awarded by the UNESCO director-general to honor prominent scientists, public figures and organizations for their contributions to the development of space science in the spirit of UNESCO's priorities. 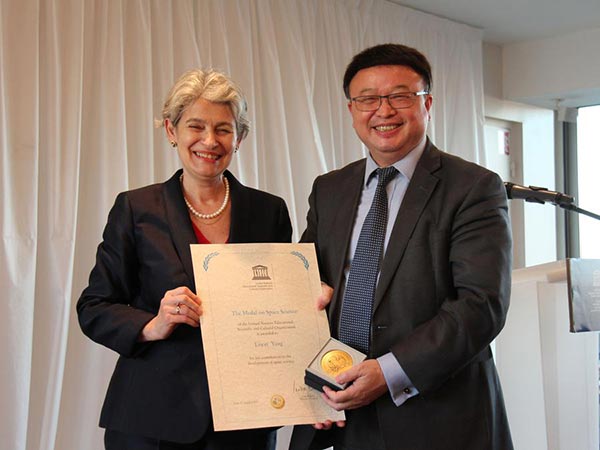