After 45 years, ping-pong athletes who took part in a series of historic exchanges between China and the U.S. in 1971 and 1972 reunited at the University of Michigan in Ann Arbor, the first stop on the Chinese table tennis team's visit to the U.S. in 1972. 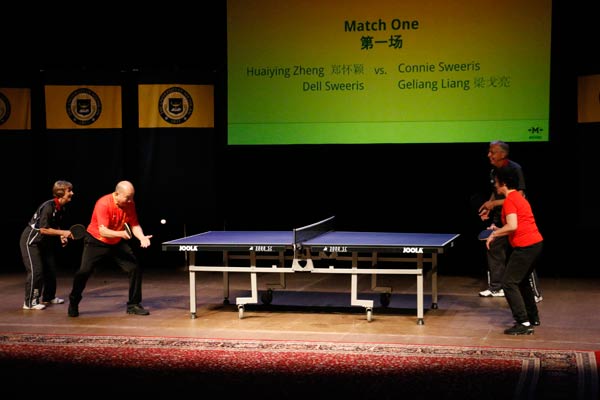 Former world champions Liang Geliang and Zheng Huaiying play with their American counterparts Dell Sweeris and Connie Sweeris, who visited Beijing in 1971, at the University of Michigan on Monday 45 years after the Chinese ping-pong delegation the U.S. in 1972. (Zhang Ruinan/China Daily)

Liang Geliang and Zheng Huaiying, the former world champions who played in the 1971 exhibition match in Beijing against the American table tennis delegation, excitedly hugged and shook hands with Dell and Connie Sweeris, who were among the nine U.S. players who visited Beijing back then.

They posed in front of a photo exhibition that presented highlights of the series that helped bring China-U.S. relations out of the deep freeze, including the 1971 Nagoya World Table Tennis Championship in Japan, where the Chinese team invited Sweeris and his teammates to play in Beijing, and then U.S. president Richard Nixon's visit to China in February 1972.

"I'm very excited and joyful to be here and meet my old friends today," said Liang. "If it wasn't for Ping-Pong Diplomacy helping to break the ice between the two nations, there wouldn't be as much exchange and communication between China and the U.S. today."

Connie Sweeris remembered her first trip to China more than four decades ago.

"I was excited and anxious because we didn't know anything about China at that time," said Sweeris. "But Chinese players and people were very friendly and welcoming."

"We not only shared table tennis but also our culture and life together," her husband Dell added.

The photo exhibition and the event were hosted by the University of Michigan, the China Soong Ching Ling Foundation and the Chinese Table Tennis Association.

"Today, we are here to commemorate the Ping-Pong Diplomacy of 1971 and 1972 that helped to bridge our nations," said Wang Jiarui, chairman of the China Soong Ching Ling Foundation.

"Relations between China and the U.S. still face many challenges, I hope we will see more and more cultural, political and economic exchanges between our two countries ― including sports exchanges like the Ping-Pong Diplomacy of 45 years ago ― in the future, to boost our relationship based on mutual respect and benefit," said Wang.

"The bilateral relationship between China and the U.S. is very significant," said Kenneth Lieberthal, a senior fellow at the Brookings Institution. "China plays a major role in today's world, and the U.S. and China together might have massive impacts globally."

So exchanges and cooperation between China and the U.S. are very important in promoting active cooperation, Lieberthal said.

"It's wonderful to see the success of Ping-Pong Diplomacy, that's all people-to-people interaction is about," said Jan Berris, vice-president of the National Committee on United States-China Relations.

A young generation of Chinese ping-pong champions, represented by Wang Hao, Ding Ning, Yan Sen and Qiao Hong, also attended the event. Both champions from today and yesterday played an exhibition match at the Power Center of the University of Michigan in the evening.