What will the catch-up by the BRIC economies mean in terms of global economic power? In 2000, the major advanced nations, as reflected by the G6, were almost 10 times bigger than BRIC countries.

In the aftermath of the global crisis, their dominance had shrunk dramatically. In 2010, they were only three times as large as the BRICs.

In the coming decade, secular stagnation in the US, Western Europe and Japan will sustain relatively low growth, whereas large emerging economies, despite relative growth deceleration, will continue their historical catch-up.

In barely a decade and a half - by the early 2030s - the BRIC's collective economic power will surpass that of the G6. And by the mid-21st century, the BRICs could be some 50 percent bigger than their advanced counterparts (Figure 2). 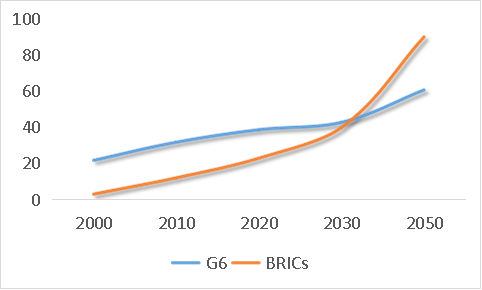 In these scenarios, I have used publicly-available economic data by the International Monetary Fund and projections based on history, industrialization and sustained growth potential.

However, just because something is possible does not mean that it will be actualized. Over time, both advanced and emerging economies must engage in structural reforms to realize their full potential.

Nevertheless, BRIC scenarios may not be optimistic enough because there are still other fairly large emerging economies that are likely to expand fast and significantly by 2050, including Indonesia, Mexico and Turkey.

Overall, large emerging nations are most likely to realize their potential if they can work together and intensify global trade and investment.

Dr Dan Steinbock is the founder of Difference Group and has served as research director at the India, China and America Institute (USA) and visiting fellow at the Shanghai Institutes for International Studies (China) and the EU Center (Singapore).