Over a thousand precious relics including fragments of finely decorated porcelain wares, gold bricks and stone inscriptions of the Qing Dynasty (1644-1911) Jiaqing Emperor's calligraphy number among the latest discoveries made during an excavation of the Old Summer Palace, also known as Yuanmingyuan, in Beijing.

Construction of the Old Summer Palace began in 1707 during the reign of the Qing Dynasty Kangxi Emperor as a gift for the emperor's fourth son, who would later go on to become the Yongzheng Emperor. Subsequent emperors would continue to expand construction of the gardens expanding them in both size and grandeur. However, the Old Summer Palace, once home to a series of exquisitely designed gardens, buildings and artworks, was destroyed by the British and French expeditionary forces during the Second Opium War (1856-60).

Announcing the discoveries in a statement on Friday, the Beijing Municipal Administration of Cultural Heritage revealed that the latest discoveries were made in the eastern part of the ruins of the Ruyuan Garden, a relatively well-preserved garden modeled after the water-filled gardens often found south of the Yangtze River. 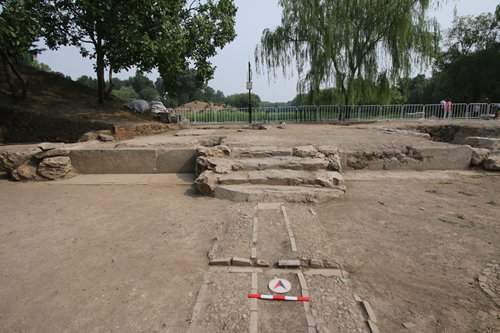 One of the ruins excavated at the Ruyuan Garden site at the Old Summer Palace in Beijing (Photo:/Courtesy of the Beijing Municipal Administration of Cultural Heritage)

Excavating a number of architectural ruins at the site, archaeologists managed to determine how the garden was constructed as well as its general structure and layout, the statement wrote.

Previously, the exact positions of the buildings in the garden were unclear even after consulting historical records, said Zhang Zhonghua, an official from the Beijing Municipal Administration of Cultural Heritage and head of the project, in an interview with the Beijing News last Wednesday.

"Emperors including Qianlong, Jiaqing, Daoguang and Xianfeng all lived at Ruyuan Garden at one point or another," Zhang Lifang, a member of the excavation project, told the Beijing News.

"The Qianlong and Jiaqing emperors in particular loved this place [the Ruyuan Garden]. Looking at drafts for renovation projects for the gardens from that time period, there were quite a number of beds placed inside the garden, which proves that the emperors spent a lot of time resting there," Zhang Lifang explained.

Archeologists also discovered a road system that connects every single building inside the garden. Featuring a drainage system and tiles beautifully arranged in the shape of flowers, the road system is of a "scientific and advanced design," according to the statement.

Not every discovery revealed the garden's former beauty, signs of a large fire were also discovered at the site, an archaeological worker at the site told the Beijing Daily in an interview last Thursday.

"The site must have once experienced a big fire that lasted for quite a long time, but we're not sure yet if this fire is linked to the fire caused by the British and French expeditionary forces in 1860," said the archaeological worker, mentioning that the team will continue its research in the hopes of uncovering what happened. 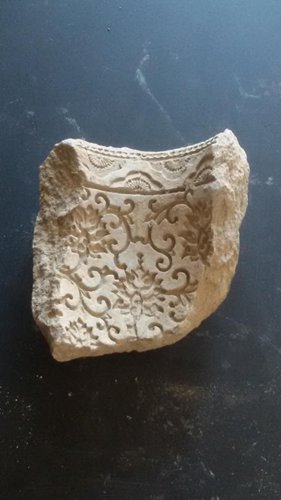 Other discoveries include porcelain vessels, fencai (a type of glaze that used materials which gave artists access to different shades of color such as pink and violet) porcelain tiles and hulufan (a calabash-shaped pottery container sometimes used to raise pet insects such as crickets) carved with exquisite patterns and Chinese characters.

Moreover, archaeological workers also found inscriptions on stones in several places around the garden that experts believe are examples of the Jiaqing Emperor's calligraphy. This discovery lends weight to the theory that "the renovation of the Ruyuan Garden was ordered by the [Jiaqing] Emperor," wrote the statement.

Right now, the second phase of the archaeological excavation is coming to an end, Zhang Zhonghua told the Beijing News.

An exhibition displaying the latest discoveries unearthed at the site will open to public soon and future excavation at the site will focus on certain areas including the royal library known as the Wenyuange, Zhang noted.