Zhao Chuang, an artist in Beijing, has collaborated with China Post on two sheets of stamps, Chinese Dinosaurs, which were issued on Friday. (Photo provided to China Daily)

Zhao Chuang, a Beijing-based artist, has drawn several birdlike dinosaurs for Chinese scientists who have found the fossils, and his images appear with scientific writings in international magazines and journals.

And he explains this by saying that dinosaurs are accepted as the ancestors of birds, and that birds make up the largest proportion of vertebrates in the world.

The illustrator believes that to propagate the knowledge of dinosaurs, more ways should be used, including postage stamps, which he calls "a museum on paper".

Meanwhile, Zhao has collaborated with China Post on two sheets of stamps, Chinese Dinosaurs, which were issued on Friday.

One sheet features a microraptor, a four-winged feathered dinosaur from about 125 million years ago, whose fossils were discovered in 2000 in Liaoning province.

The other sheet depicts a Mamenchisaurus that has a remarkably long neck and whose fossils were discovered in 1952 on a highway construction site in southern Sichuan province. 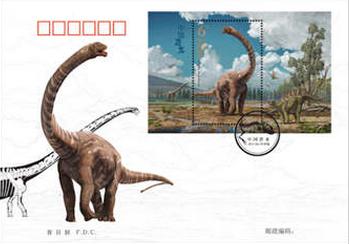 The two sheets show the diversity of dinosaurs in China, spanning some 200 million years, from the early Jurassic to the late Cretaceous periods.

Along with the stamps, China Post is also working with Zhao to develop dinosaur-themed merchandise.

The two founded a scientific art research institution, the Pecking Natural Science Organization in 2009. And they are working with scientists on images of dinosaurs to develop themed books, toys and other products.

Yang says the books are built up on the efforts of generations of Chinese scientists, and they want to share with readers that the dinosaur fossils found in China and the research by Chinese scientists are both world class.