Commercial space center to take off

Construction starts on first base for privately financed projects 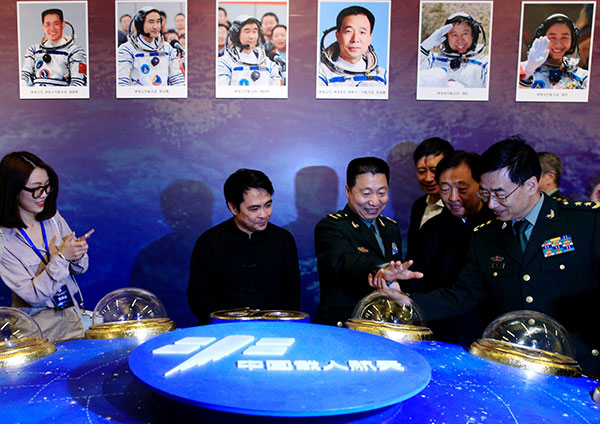 China's first man in space, Yang Liwei, compares his hand with his preserved print displayed at an exhibit about China Space Day at the National Museum of China in Beijing. JIANG DONG/CHINA DAILY

The Wuhan National Space Industry Base aims to attract at least 100 enterprises involved in the space industry before 2020 and generate 30 billion yuan ($4.36 billion) in annual gross product by then, according to China Aerospace Science and Industry Corp, the main investor. The center will occupy 68.8 square kilometers in Xinzhou district.

Expace Technology, a subsidiary of CASIC that provides commercial launch services, will invest 1.7 billion yuan to build production and assembly plants for solid-fuel carrier rockets for commercial launches. The company plans to make about 20 rockets at the center each year, it said in a statement.

In China, a commercial launch usually means a space launch financed by an entity other than a Chinese government or military agency.

The CASIC Second Academy will invest 300 million yuan to construct a research, development and manufacturing complex at the center to make small satellites. CASIC has said it will launch 156 small communications satellites into low Earth orbit, at an altitude of 160 to 2,000 km, before the end of 2025. They would form a network capable of global coverage.

Also Monday, Expace Technology said it signed a contract with an unnamed domestic client to conduct four commercial launch missions in a week early in 2018.

The missions will employ Kuaizhou 1A, a solid-fuel carrier rocket developed by the CASIC Fourth Academy in Wuhan. The rocket has a liftoff weight of 30 metric tons and is capable of sending a 200 kg payload into a sun-synchronous orbit, or a 300 kg payload into a low-Earth orbit. Unlike most Chinese carrier rockets, it uses a transporter-erector-launcher vehicle rather than a fixed launch pad.

The first flight of Kuaizhou 1A, to launch three small satellites, was in January at the Jiuquan Satellite Launch Center in northwestern China.

CASIC Fourth Academy began to develop Kuaizhou solid-fuel rockets in 2009 as a low-cost, quick-response rocket family for the commercial launch market. It has launched three of the rockets.

Zhang Di, deputy director of the academy and chairman of Expace, said a new-generation Kuaizhou 11 is under development and will make its first flight before year's end.