The Nianni 588 is seen on fire. (Photo provided to chinadaily.com.cn)

The rescued sailors from the Nianni 588 said they had no time to take the life raft or to put on life vests after the boat's engine room caught fire. So they just grabbed some floating balls and jumped into the water.

When saved by the two vessels from the Chinese mainland, the sailors had been floating in the sea for more than two hours and said they felt very exhausted.

Eighteen of them, 17 from Indonesia and one from the Chinese mainland, were saved by the Mingxing, a ship belonging to a branch of CNFC Overseas Fisheries Co., Ltd. in Zhoushan, Zhejiang province. Three were pulled out of water by the Liaoyu No.1.

Shi Sihong, captain of the Mingxing, said it was about 10 pm Friday when he spotted red smoke some 5.8 nautical miles in front of his ship. Based on his 20-year experience in deep-sea fishing, Shi realized that the smoke was caused by boat fire and promptly steered the ship towards the Nianni 588.

The Nianni 588 is owned by Taiwan's Longda Fishery Co. All of the rescued mariners will be handed over to other company vessels. 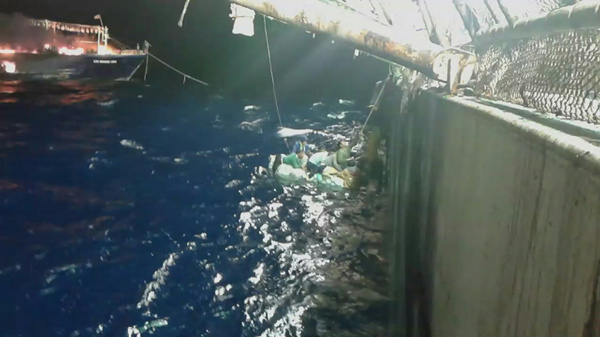 Crew members onboard the Mingxing rescue sailors from the Nianni 588. (Photo provided to chinadaily.com.cn)