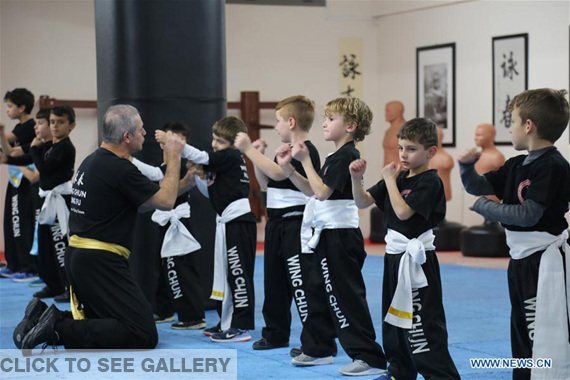 A group of Cypriot kids as young as six years old gather every other night in a gymnastics hall in Nicosia to learn kicking and punching Chinese style.

They are the dedicated trainees of Sifu Yiannos Christoforou, a golden sash certified Instructor of Wing Chun Kung Fu, who has been teaching one of the most popular versions of street fighting for more than six years.

The Academy has 50 trainees currently, 30 adults and 20 kids. But Christoforou says he used to have as many as 75 trainees a few years ago.

"The 2013 economic crisis turned things upside down. Some of my students lost their jobs and others had their income slashed and could not afford the fees. As far as I know, at least 10 percent of them went abroad to find a job," said Christoforou.

He told his students who lost their jobs to continue training and pay their fees after they could find a job.

"Some of them accepted the offer but many refused out of pride and quitted the academy," he said.

Christoforou himself started training in 1989 at the age of 21. His instructor was German Wing Chun master Philipp Bayer, of the Ip Man/Wang Shun Leung lineage.

"I was influenced by the Bruce Lee movies and other movies centered on martial arts and street fighting. I chose Wing Chun because it is result oriented. Its aim is to knock out an opponent in the shortest possible time," he says.

He says that other styles of street fighting may be impressive to watch being performed in exhibitions, but Wing Chun is the most effective way to neutralize an attacker, and suitable for everyone to practice, young and old, men and women.

"It is based on the knowledge of the anatomy of the body and uses the most effective technics. It is both an offensive and defensive method using quick kicks and punches at the same time directed at vulnerable spots of the body," he explains.

He says that Wing Chun as originated in south China in 1939, is very direct in its approach to either attack or defense and is simple to learn, but at the same time requires hard work and dedication to achieve perfection.

"You cannot become a fighter instantly. But once you master it you can face any attacker," he said.

There are several schools of all forms of martial arts in Cyprus, like Tae Kwon Doe, Judo, and other styles of Kung Fu.

Christoforou believes that the popularity of eastern martial arts in Cyprus is due both to an increase in crime during recent years and to the influence of movies featuring street fighting.

He makes his living as a quality control manager at one of the most known ice cream factories in Cyprus, but he would like to only teach Kung Fu if he could make a living out of it.

"Had it not been for the economic crisis, I would have given up my job and teach Wing Chun full time. But the number of trainees I have at the time is small as many people are still without a job and they are not enough to give me an adequate income," said Christoforou after the last of his trainees left floor.

His training hall at the suburb of Strovolos, several kilometers from the center of Nicosia, is amply decorated with pictures of the founders of Wing Chun and instructing directions in Chinese.

Two large posters display the terminology of Wing Chun moves and striking in Latin characters according to the Cantonese pronunciation alongside the explanation in English.

"Although almost everyone speaks English in Cyprus, but I insist that all directions are given in Chinese. The trainees have learned to understand them," said Christoforou.

He did not visit China yet, but he says he admires the Chinese culture and civilization and loves Chinese food.

"I want to visit China sometime to see the country and also to pay my respects to the founders of Wing Chun in Guangdong and Hong Kong," he said.