Pilots, surgeons and firefighters are traditional male-dominated professions that few girls have dared to dream of. Those who study traditional female-dominated majors, such as education and nursing, may not be fully aware of what the jobs really look like when they choose their majors.

Inspiring Women, a project initiated by the British Council, was launched in Beijing on Sunday to provide girls from middle schools to colleges a chance to get to learn more about their future careers in advance and learn from the experiences of outstanding women from all walks of life.

On the occasion of the upcoming fourth China-UK High Level People to People Dialogue, to be held in Shanghai on Tuesday, the Inspiring Women project on Sunday launched its online platform for volunteers and schools.

Women of all professions are welcome to sign up as volunteers and spend one hour a year speaking and sharing information on their career, their education path and their life choices to the young women at a specific school. School heads and teachers are also welcome to search the platform and find a volunteer in a specific profession to give a speech to their female students.

"We are expecting at least 1,000 volunteers' registration in 2017," said Carma Elliot, director of British Council China.

Carma herself, as well as Dame Barbara Woodward, British ambassador to China, also shared their own journeys as successful career women.

Paralympics gold medalist Susie Rogers shared an enthralling account of her journey to win a team gold medal. "I would always give the advice to women that never to give up and my motivation was to focus on little positive things that I could do every day," she said. 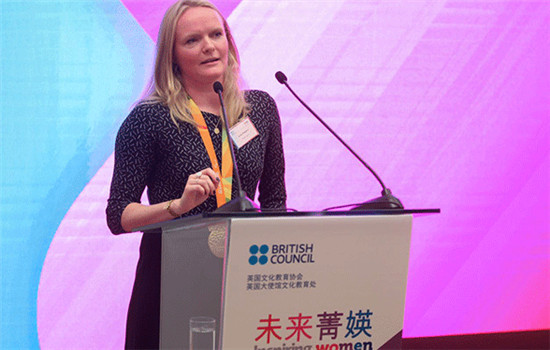 Ma Feng, who is from a rural area in North China's Gansu province, told the audience that if one has a dream, she can find the way to achieve it. Ma was sponsored by the Educating Girls of Rural China Organization and studied at Liverpool University in the UK, and found a good job at a financial investment company after graduation.

Founded in 2013, the Inspiring Women project has had great success in UK by inspiring the girls to a broader career routes. "Women from archeology to zoology, from junior to senior positions will share their own experiences to the girls here in China," said Nick Chambers, co-organizer of the project and also CEO of The Education and Employers Taskforce charity.

In 2015 and 2016, Chinese Vice-Premier Liu Yandong proposed that women be added to the China-UK People to People Dialogue as the eighth theme, and the launch of Inspiring Women China is a proactive response to China's interest in addressing the women's agenda.

Li Yuanchao, China's vice president, in his opening remarks at the Women 20 (W20) in Xi'an, May 2016, stated that the elimination of all forms of discrimination against women workers and managers will raise per capita productivity by 40 per cent. It is all the more important to pool women's wisdom and strength at a time when the global economic recovery remains fragile, Li said.