A farmer named Li Wenhua from Pujiang County in southwestern China's Sichuan province recently found a rare spider while doing farm work at home. Only six such spiders, whose scientific name is Cyclocosmia ricketti, have been spotted in China since 2000.

The spider resembles other ordinary varieties, but its rear end is large and round. Li therefore captured the animal in a plastic bottle and took it home. According to insect expert Zhao Li, the Cyclocosmia ricketti is a very rare species. Zhao said the spiders mainly live in the caves of Fujian and Zhejiang provinces. 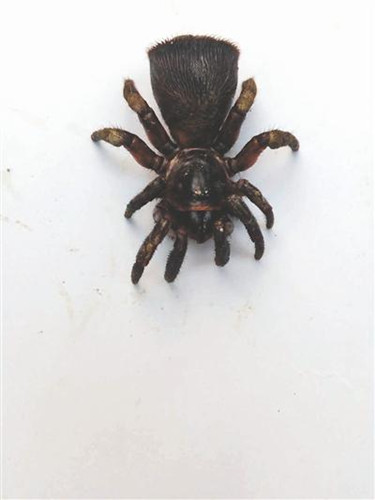 "The spider is of extreme scientific value, and it is definitely a rare species in Sichuan province," Zhao stated, adding that he had failed many times to find it. The spider can survive in temperatures as low as 13 degrees Celsius. However, winter temperatures in Sichuan are often much lower than this, which suggests that its true ability to resist cold may not be in line with previous research. Zhao told Chengdu Economic Daily that the discovery of the Cyclocosmia ricketti in Pujiang might be the northermost discovery site ever recorded.

Because of rare spider's mild temperament, many people keep them as pets. They can sell for as much as 12,000 RMB online. Upon learning this, Li has decided to sell the spider.