China's first-generation heavy-lift carrier rocket, the Long March 5, made its maiden flight at 8:43 pm Thursday, moving the country closer to its goal of building a manned space station.

The 57-meter-long spacecraft, China's largest carrier rocket, blasted off into thick clouds from the Wenchang Space Launch Center in the island province of Hainan.

Its payload is comprised of the Shijian 17 scientific experiment satellite and the Yuanzheng 2, a restartable rocket upper stage that is able to send multiple spacecraft into different orbits during a single mission.

The launch was witnessed by an estimated 100,000 spectators who had flooded into Wenchang over the past few days to view the colossal rocket, the local government said.

As the nation's largest and most technologically advanced launch vehicle, Long March 5 will be crucial in putting China's planned manned space station into orbit, as well as sending unmanned probes to Mars, according to a statement released by the State Administration of Science, Technology and Industry for National Defense, which oversaw its development. 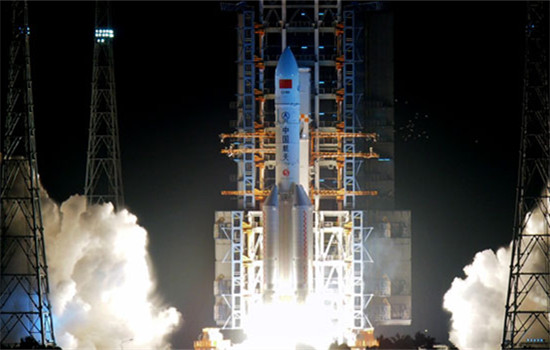 Assembly of the permanent manned space station is planned to start in 2018, with a completion date of around 2022. It will consist of three parts - a core module attached to two space laboratories, each weighing about 20 metric tons.

China also plans to send an unmanned probe to orbit and land on Mars around 2020, according to officials.

The Long March 5 has a liftoff weight of 870 metric tons, a maximum payload capacity of 25 tons to low Earth orbit and 14 tons to geosynchronous transfer orbit.

It has two core stages, four boosters and uses a liquid oxygen and kerosene mix and liquid oxygen and liquid hydrogen mix as the propellants for its engines, which means it is more eco-friendly than previous Long March rockets, according to the its developer, the China Academy of Launch Vehicle Technology in Beijing.