Chinese Premier Li Keqiang on Tuesday called for further cooperation in education between China and the European Union (EU) to help the economic and social development of both sides.

"China and the EU have a long tradition and solid foundation in educational cooperation, which enjoys promising prospects," said Li in a written congratulation letter to the opening of the China-EU Education Ministers Conference held in Beijing on Tuesday.

Cooperation in education has helped boost cultural exchanges as the "third pillar" in China-EU relations, the premier said, stressing the key role of the conference -- the first of its kind -- has played in China-EU people-to-people exchanges. 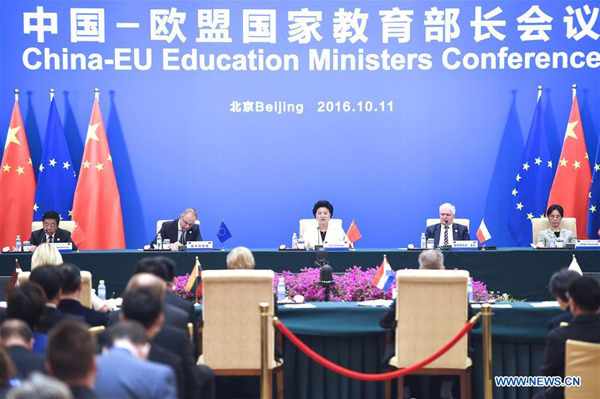 In her speech, Liu lauded the contributions the dialogues on education policies and student exchanges have made to deepen friendship and relations between China and the EU.

The ceremony was attended by education ministers, senior representatives, diplomats and scholars from 34 European countries.

According to official statistics, China and EU countries have signed more than 80 bilateral agreements on educational cooperation, and 131 Confucius Institutes have been set up in EU countries with more than 620,000 students.