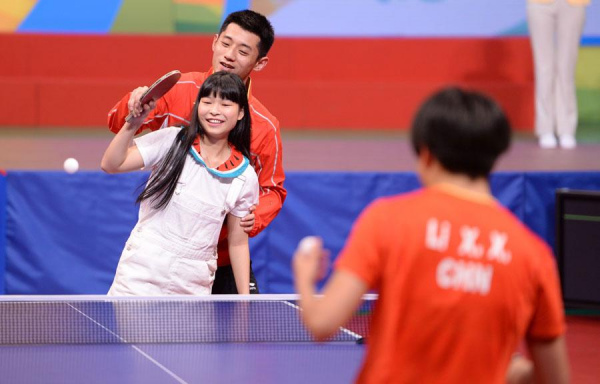 A delegation of Olympic athletes from the Chinese national team delighted Hong Kong crowds with their talents and spirit on Sunday in a series of activities in the city.

Tens of thousands of fans cheered for their favorite athletes in the city's major sports center and swimming pool complex, as well as at local shopping malls, community centers and schools.

It was the fifth visit paid by elite Olympic athletes to Hong Kong since the tradition began in 2000 - the first year for the Olympic Games after Hong Kong's return to Chinese sovereignty in 1997.

In a variety show on Sunday afternoon, the Olympians showcased their talents in different performances and shared their experiences and feelings.

Sprinter Su Bingtian and divers Lin Yue and Chen Aisen, who are from Guangdong province and speak Cantonese, also received a great reception.

The new Olympic badminton champion, Chen Long, revealed that he had already "turned in" the gold medal he won in the men's singles in Rio de Janeiro to his girlfriend, Wang Shixian, another elite badminton player.

The climax of the day came from the national women's volleyball team, whose members shared their triumphs and showed their skills amid wild cheers. Even swimmer Sun Yang, whose parents are professional volleyball players, demonstrated his volleyball talents.

The Olympians' demonstrations of badminton, table tennis and diving on Sunday morning were a hit. There were friendly matches with their Hong Kong counterparts and with young local athletes.

Facing the enthusiastic crowd, Ma Long said he wished all would learn from the national team's spirit of never giving up.

Liu Ka-hei, 10, got to play with Ma, the gold medalist: "I was very nervous, but excited," Liu said. "I wish Hong Kong would have more events like this."

Since the delegation's arrival on Saturday, sports fans, including government officials in the region, have eagerly sought to take selfies with the athletes or ask for autographed memorabilia.

Tickets had sold out quickly, but people could enjoy live broadcasts on TV.

The athletes will depart for Macao on Monday afternoon.