Yi ethnic opera to be staged in Beijing 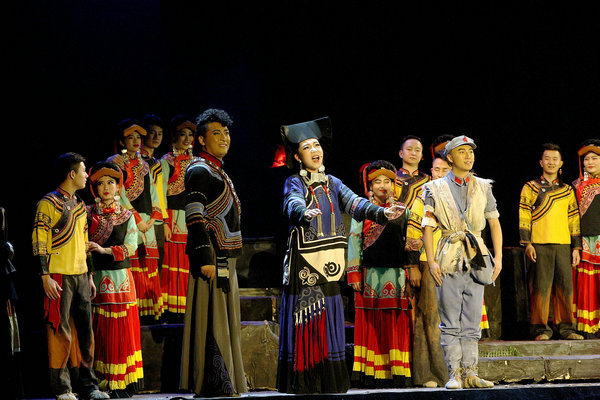 The Yi ethnic opera Yi Hong will be staged in Beijing on August 17 and 18 at Tianqiao Performing Arts Center. (Photo provided to chinadaily.com.cn)

An ethnic opera, Yi Hong, which tells the story of how the Yi people of Daliangshan Mountain area of Liangshan Yi autonomous prefecture battled together with the Red Army in the 1930s, will be staged in Beijing on August 17 and 18 at Tianqiao Performing Arts Center.

The opera was first staged in Liangshan, southwest China's Sichuan province, in July 2014 and has been performed over 100 times around the country in 2015, which attracted an audience of over 10,000. Last year, it premiered in Beijing at the National Center for the Performing Arts.

According to Li Ting, the scriptwriter and artistic director of the opera, who initiated the idea of the production, all the actors of the show are from Liangshan Song and Dance Troupe, the first national performing art troupe of the Yi ethnic group, which was founded in 1956 in Sichuan province, and nearly all of them are Yi people.

"It guarantees the show's spirit of featuring Yi ethnic people's customs, music and dance," says Li, who was the head of Sichuan People's Art Theater.

For Li, who spent her youth in Daliangshan Mountain area from the time she was 6 to 26, the show is significant to her personally.

In 1935, the Chinese Red Army pushed north to resist the Japanese invaders. During the historic Long March (1934-1936), the Red Army passed through the Yi ethnic group area of Liangshan Yi autonomous prefecture. The head of the local Yi ethnic tribe, Xiaoyedan, was allied with the Red Army General Liu Bocheng, helping the Red Army troops pass through the area and win the victory of capturing the Luding Bridge and forcing the Dadu River.

"I spent a very long time living in that area and I heard so much about the stories between the Red Army and the Yi people, which I want to share with the contemporary audiences," says Li. Since the 80th anniversary of the end of the Long March is being marked this year, the opera will tour around the country till the end of the year.

Yi Hong is one of the 90 performances of the ongoing 5th National Ethnic Minority Arts Festival, which is held from Aug 16 to Sep 4 in Beijing. Over 7,000 actors from 43 performing art troupes of 31 provinces in China join in the event.

The first National Ethnic Minority Arts Festival was held in 1980 in Beijing, aiming at celebrating the diverse ethnic culture of China.