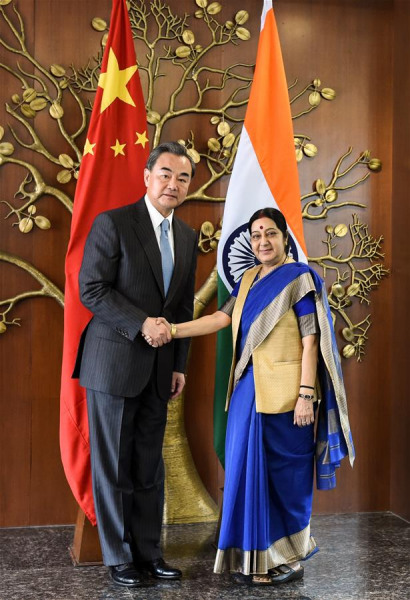 China is ready to build closer partnership with India, and enhance pragmatic cooperation with India in all fields, visiting Chinese Foreign Minister Wang Yi told his Indian counterpart Sushma Swaraj during their meeting on Saturday here.

Wang positively reviewed the development of China-India ties, which he said have been making remarkable and comprehensive headways in recently years thanks to joint efforts by both sides.

Leaders of the two countries have maintained close exchange of visits and communications, the dialogue mechanism between the two governments has been ever increasing and perfecting, the complementariness of the two economies has been further tapped and a win-win cooperation pattern is taking shape, Wang noted.

What's more, the two peoples have enhanced understanding and friendship through more and more trade and cultural exchanges and communications, he added.

The two sides have strengthened strategic dialogue on such major international issues as climate change and global action, and safeguarded the common interests of emerging markets and developing countries.

China and India are strategic partners, and China is ready to work with India to master the general course for the development of ties, build a closer development partnership, and expand their all-around pragmatic cooperation, Wang said.

China will strengthen communication and coordination with India to render both the upcoming Group of 20 (G20) summit in China's Hangzhou and BRICS summit in the Indian state of Goa successful, and thus elevate the status and role of emerging economies on world arena, Wang said.

The two sides are to enhance cooperation in such fields as railway and industrial park construction, security, anti-terror and anti-extremism, and to expand communication and exchanges in education and tourism, and facilitate more exchanges among regional governments of both countries, and jointly safeguard their common interests as well as those of all developing countries, Wang propositioned.

Wang said that the two countries have much more common interests than differences, more needs for cooperation than competition, while expressing confidence that the two sides can hold onto the general direction of ties, and refrain from allowing difference over singular issues to baffle the general cooperation.

Swaraj, for her part, said that India has good prospect of the development of India-China relations, and has taken a series of measures to encourage Chinese investors and promote bilateral engagement, as as to foster the further development of ties.

The two sides have good coordination on regional and international issues, she said, adding that India attaches great importance to ties with China, and is ready to strengthen the ties in various fields, strengthen humanitarian exchanges, and properly handle existing problems with patience, as as to inject new vitality to the bilateral ties.

The two diplomats also exchanged views on specific issues on bilateral ties, as well as regional and international issues of common concern, such as the situation on the Korean Peninsula and the Briexit.