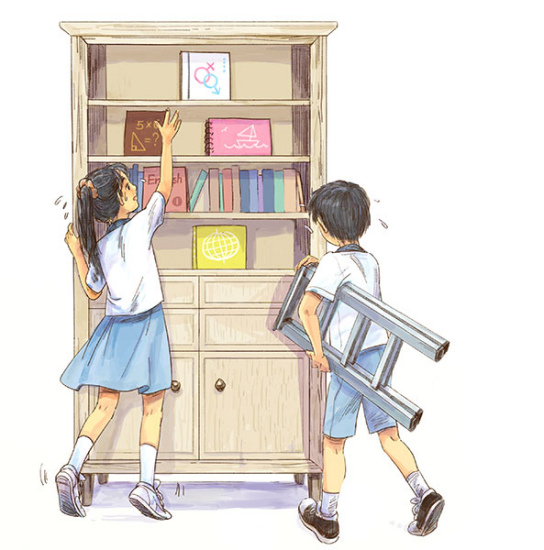 Health experts are calling for sex education to be included in China's school curriculum, saying the lack of formal tuition, allied with misunderstandings and outdated ideas, is putting young people at risk of sexually transmitted diseases and unwanted pregnancies.

The topic has recently been at the center of a heated debate on Sina Weibo－China's version of Twitter－after campaigners condemned a sex education textbook that claimed premarital sex has a "tremendously negative psychological and physical impact on girls".

"Girls do not earn more love from boys by sacrificing their bodies, but rather are seen as 'degraded' by their 'conquerors'. As a result, premarital sex can cause women to lose love," according to the book, published by the 21st Century Group. Since 2004, about 2,000 copies have been issued to school libraries in Jiangxi province in Southeast China.

For thousands of years, sex could not be discussed openly in China. Even today, it is taboo in most of the schools. There is no sex education in schools, only lectures on psychological health that contain little practical knowledge. Parents also avoid discussing the issue with their children.

Sex education is a comprehensive definition－it's not simply about sexual practices but is a fully developed concept related to many other issues, according to Gou Ping, a professor of psychology at Chengdu University, the only college in the country that offers sex education as a minor course.

The number of cases of sexually transmitted diseases registered at the Center for Disease Control and Prevention soared to 750,000 in 2003 from 5,800 in 1985.

Taking HIV/AIDS as an example, China now has 575,000 carriers (people who are HIV positive, but have not developed full-blown AIDS), and patients (those with the fully developed disease), more than 90 percent of whom were infected via sexual contact.

Unwanted pregnancies and abortions are also threatening the younger generation. In 2014, the Sichuan Sex Education Society launched a six-province survey of more than 5,000 students ages 12 to 24. It showed that 24 percent of respondents had engaged in premarital sex, and 20 percent had abortions.

While the government is still trying to formulate a nationally recognized sex education curriculum, some nonprofit organizations have taken the initiative and launched pilot projects.

The Youth Love Station, supported by the AIDS Prevention Education Project for Chinese Youth, is one of them.

By providing comprehensive sex education, the project not only teaches students about gender differences and safe sex, it also aims to convey the basic values of "love with respect" to young people.