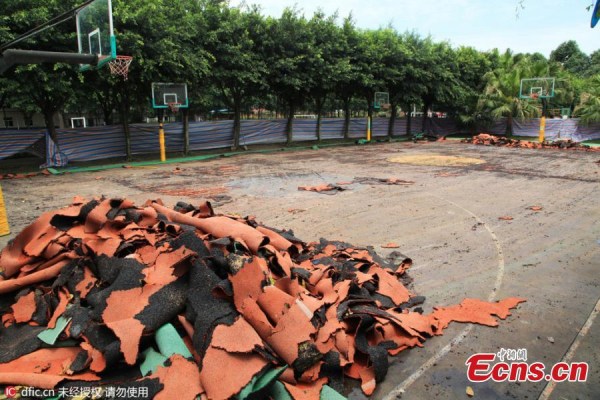 Safe limits of dangerous chemicals emitted by synthetic running tracks, playgrounds and artificial turf - volatile organic compounds and carcinogenic formaldehyde - have been specified for the first time in new standards for schools in Zhejiang province.

The new standards were published on the education department's website over the weekend.

Students at several primary and middle schools fell ill and the synthetic materials used for the running tracks and artificial grass were suspected culprits.

One grass sample taken from the new campus of Hangzhou Foreign Languages School, where students suffered nosebleeds, coughs and delayed menstruation, was found to be giving off hazardous benzene more than 14 times above the national safety limit.

The two new benchmarks are not included in the national standards, but are included in provincial standards in order to provide stricter precautions that will better safeguard students' health, according to the education authority.

Summer heat has been cited as a possible cause of increased chemical emissions from synthetic materials. Under the standards, a group of five teachers, parents and experts will assess odors at school facilities regularly.

The five will rate odors on a 1-5 scale, with 1 meaning no odor and 5 signifying strong, pungent odor. If three of the five reach a consensus at 3 or above, the running track will be closed.

Beijing, Shanghai and Shenzhen are mulling or have recently published new local standards for the synthetic materials in schools.

Under Shenzhen's standards, which were released in May, eight substances are covered, including harmful PAH (polycyclic aromatic hydrocarbons). These are not included in national standards.

"This is to avoid situations in which some products are qualified under the standards but are still problematic," said Ren Jun, chief engineer at Shenzhen Institute of Building Research Co, who helped formulate the standards.

"Under the current system, a supplier who offers the lowest price in bidding will win a project at a school. But this seems questionable for projects with chemical materials," Shao said.