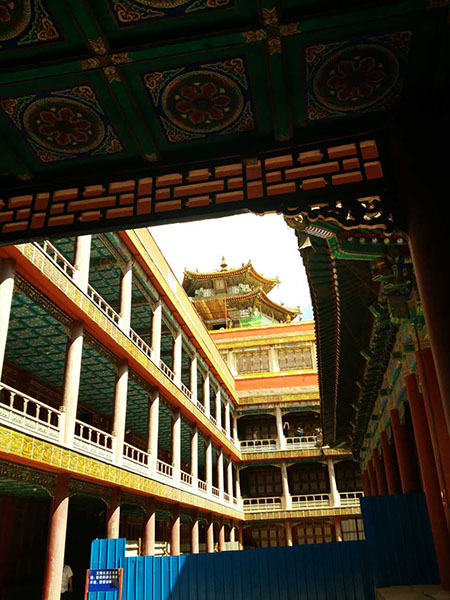 The Temple of Potalaka was built in 1771, loosely modeled after the Potala Palace in Lhasa, capital of the Tibet autonomous region. (Photo by Wang Kaihao/chinadaily.com.cn)

Restoration on major buildings in Putuo Zongsheng Temple, commonly known as the Temple of Potalaka, in Chengde, Hebei province, was announced to be completed on Saturday.

The Temple of Potalaka was built in 1771, loosely modeled after the Potala Palace in Lhasa, capital of the Tibet autonomous region. The restoration completion ceremony also marked China's major celebration event of the 11th annual National Cultural Heritage Day, which fell on that day.

It is the biggest one among the 12 satellite temples around Mountain Resort, which is also considered China's "Summer Capital" in Qing Dynasty (1644-1912) due to several emperors spending much of their summertime there.

Mountain Resort and its outlying temples were inscribed on to UNESCO World Heritage list in 1994, and is the largest surviving royal garden and temple complex in the world. The mountain resort alone covers an area of 564 hectares, roughly equal to two Summer Palace in Beijing.

According to Zhang Lifang, director of Hebei Provincial Administration of Cultural Heritage, a whole-scale restoration on Mountain Resort and the temples began in 2010, which included 105 small units of projects and 600 million yuan ($91.5 million) in cost from direct allocation from the central finance.

The recent restoration in the Temple of Potalaka covers 55 individual constructions within its walls, which Sun Yingzhuo, an expert from Hebei Ancient Construction Research Institutions, said is a breakthrough as previous restorations only focused on biggest constructions along the axis. 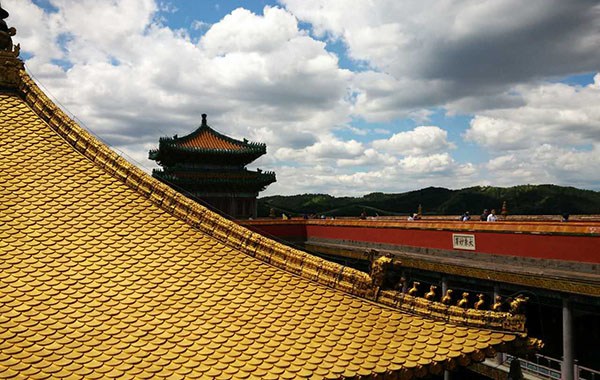 The Temple of Potalaka was built in 1771, loosely modeled after the Potala Palace in Lhasa, capital of the Tibet autonomous region. (Photo by Wang Kaihao/chinadaily.com.cn)

Sun, who is in charge of project, said the copper roof gilt with gold was the most difficult part in the restoration process since there are few references on similar types of constructions in China and thus was in need of continuous experiments.

"Drainage facility was another key project," Sun added. "Many facilities from Qing Dynasty had been out of repair for long time, and there many plat rooftops in such Tibetan style constructions. If drainage system doesn't work well, it will be potential hazard for the cultural heritage."

Still, he said as long as the original facility can work and only needs partial restoration, no modern drainage system will be introduced to minimize interruption on historical information.

Though main restoration on construction has been finished, some follow-up auxiliary projects, such as on indoors decorative paintings, will continue until the end of this year.

"We don't aim to offer them brand new look," Tan Pingchuan, who hosts painting restoration, added. "Vestige of previous restorations is also part of history and needs to be maintained. We will reinforce and clean the paintings, but we don't draw something new."

And, the restoration will also offer abundant data and files of these World Heritage sites, according to Lu Qiong, deputy head of cultural heritage protection office under the State Administration of Cultural Heritage.

"These files will set the foundation for further protection and display in the future," she said. "And, a long-term mechanism of preventive protection is to be established to enhance daily maintenance under more rigid supervision."