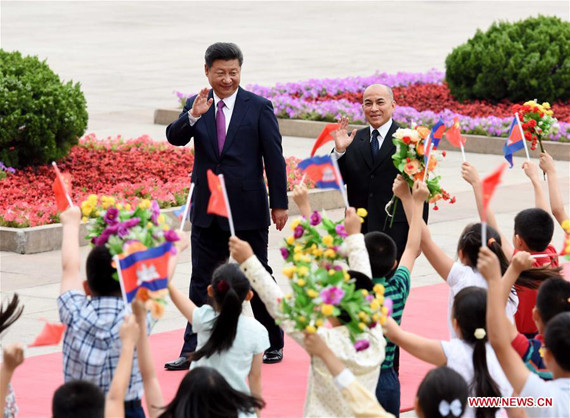 China and Cambodia, during the state visit of Cambodian King Norodom Sihamoni, have pledged to further consolidate their traditional friendship.

China values its special friendship with the Cambodian royal family and bilateral relations, and supports Cambodia's development path, said President Xi Jinping during his talks with Sihamoni on Friday afternoon.

Calling Cambodia a "good neighbor, like a brother" and "a good friend with sincerity," Xi said the traditional friendship was treasured by the two peoples.

He called on both sides to maintain close engagement, especially between the state leaders, and strengthen strategic communication.

The two sides should synergize their development strategies, and speed up negotiation on governmental documents related to Belt and Road Initiative projects, Xi said.

He called on the two countries to strengthen cooperation in areas including agriculture, water conservation, infrastructure, information communication and law enforcement.

The two countries should continue to support each other and conduct closer coordination within multilateral mechanisms, he said.

The president noted that China is willing to strengthen communication and coordination with Cambodia within multilateral frameworks such as the East Asia cooperation and Lancang-Mekong Cooperation, to jointly maintain the common interests of the two countries and other developing countries.

Li said China supports the integration process of ASEAN, and the construction of the ASEAN community, adding that the China-Cambodia friendship complements China-ASEAN relations.

He added that China highly values the positive role that Cambodia plays within ASEAN and hopes it can contribute more to improving China-ASEAN relations, as well as the peace and stability in the region.

Calling friendship with China "time tested," Sihamoni said the Cambodian side is willing to further consolidate the friendship, strengthen communication and cooperation in all areas, and promote the bilateral relation and ASEAN-China relations.

Sihamoni is on a three-day state visit, from June 2 to 4, at the invitation of Xi.