A young girl gets into the Christmas spirit by wearing reindeer antlers during a class on December 24 at an English training center in Maliandao, Xicheng district. Photo: Li Hao/GT

Primary and secondary education sectors provided 8.7 percent of total job opportunities for graduates in 2015, an increase of 2.2 percent over 2014, according to a report on employment of Chinese college graduates in 2016 released by an education consulting company MyCOS on Sunday.

However, the average salary of those joining primary or secondary education sectors was the lowest, about 3,500 yuan ($533), six months after graduation.

The other top five sectors that recorded biggest job increase were: internet development and application; finance; medical care or first aid service; and media and publishing.

College graduates who joined internet development and application industries were best paid, with an average monthly salary of 5,017 yuan, six months after graduation.

The proportion of undergraduates who took up job opportunities rose 3.4 percent from 2010 to 2015. The ratio for higher vocational college graduates from 2013 to 2015 stood at 2.4 percent.

The five occupations that saw sharpest fall in work opportunities in 2015 were architectural engineering; machinery or instrument; marketing; electrical or electronics (with computer science excluded); and automobile engineering.

Architectural engineering was among the cluster that witnessed an increase in jobs from 2011 to 2014 and the decline in 2015 may be a result of the tightened national policy on property, said MyCOS.

The MyCOS report is based on its tracking assessment on graduates of 2015 for six months since their graduation, covering 123,000 undergraduates and 127,000 higher vocational college graduates. 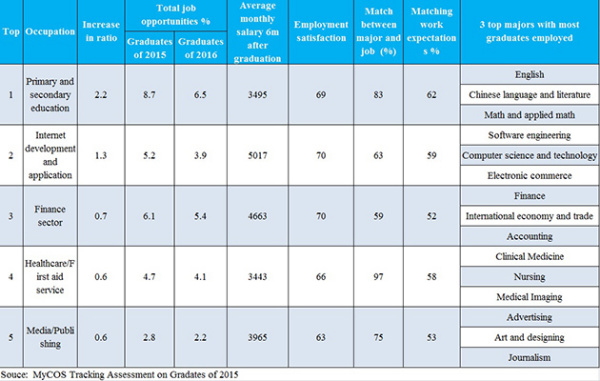