Research shows a link between the virus, poor brain development 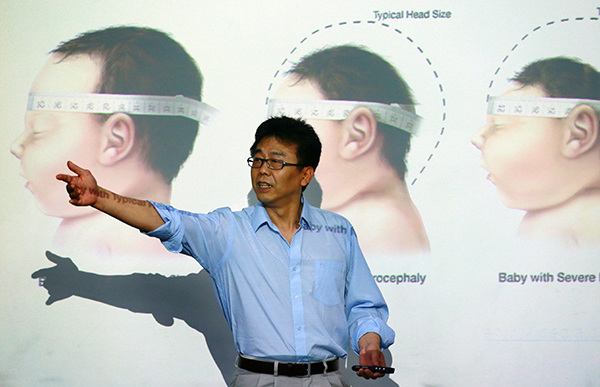 A research finding by Chinese scientists that was published in a leading academic journal identified a direct link between the Zika virus and microcephaly－a disorder in which the head is small due to a defect in brain development.

The authors published their findings on Wednesday in Cell Stem Cell, a monthly journal that focuses on important findings in stem cell research. They showed that mouse fetuses injected with the Asian Zika virus that were carried to term displayed characteristic features of microcephaly.

The Zika virus has broken out in South America and been spreading around the world since 2015－including China.

"Zika is not a newly discovered virus, but its breakout in 2015 attracted more attention than ever before because more than 6,000 babies born in Brazil from March 2015 to March 2016 were diagnosed with microcephaly. Most of these babies' mothers were infected by the Zika virus," Qin said.

Until now, no direct connection between Zika and microcephaly has been found. According to Xu, mutations of about 30 human genes could cause microcephaly.

Recently, a research team of scientists from the United States and Brazil published a finding in Nature, showing that the Brazilian Zika virus strain could lead to birth defects.

But the Chinese research went further, Xu said. The most surprising finding was that it was mostly neural progenitor cells that became infected at the beginning, and mostly neurons infected at a later stage, five days after injection, when the presence of Zika virus increases several hundredfold.

Xu said he hoped the finding would lay a good foundation for further research and control of the virus. The animal model, together with the global data sets of infected brains, "will provide valuable resources for further investigation", he said.

Zika is a virus that is primarily spread by mosquito bites. In general, the symptoms known to be caused by the virus tend to be mild. They include fever, rash, pain in the joints and pink eye. Symptoms usually occur two to seven days after infection. Many people who are infected do not show any symptoms, and those who do can be treated easily. Zika was first found in Africa and spread to Asia and Latin America. The virus is spreading rapidly in Latin America, while Thailand and the Philippines are the most Zika-infected countries in Asia.