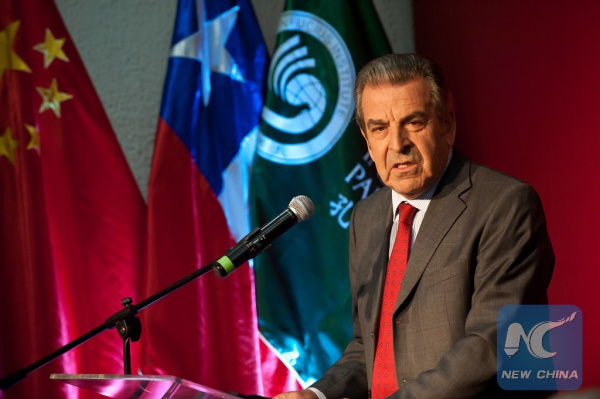 Former Chilean President Eduardo Frei Ruiz-Tagle speaks during the opening ceremony of the Regional Center of Confucius Institutes for Latin America, at the Confucius Institute of the Santo Tomas University, in Santiago, capital of Chile, May 12, 2014. (Photo: Xinhua/Jorge Villegas)

Confucius Institutes in Latin America provide not only Mandarin courses but also cultural events for locals, serving as an important bridge between the region and China, a Chilean education director told Xinhua during an interview.

Chile was the first country in the region to host a Confucius Institute eight years ago, Lafontaine said, adding that his center now has branches in Mexico, Costa Rica, Cuba, Panama, Colombia, Venezuela, Ecuador, Bolivia, Brazil, Argentina and Uruguay, as well as in the English-speaking Caribbean islands of Trinidad and Tobago, the Bahamas and Jamaica.

"More than a million people (in Latin America) participate in cultural activities organized by the Confucius Institutes," said Lafontaine.

Among these events in Chile was the presentation of a play about the life of famed Chinese admiral and explorer Zheng He in the 15th century, following presentations in Brazil and Argentina.

For Latin Americans, China used to be an exotic and mysterious land, yet "today there is a growing interest in its development", Lafontaine told Xinhua.

Different from many Confucius Institutes operating within universities, some institutes choose to reach out to local communities and streets, Lafontaine added.

"We want students in public or private primary or middle schools to have access to the Chinese language and culture, as well as the elderly, which allows us to expand knowledge about China to a much greater degree," he said.

Lafontaine said his regional center is opening Confucius Institutes in all Chilean cities, which is expected to reach 14 by the end of the year.