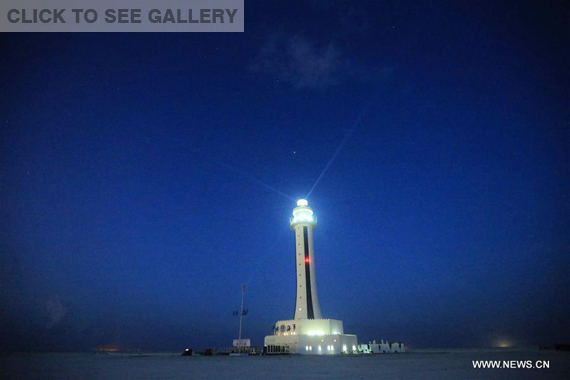 China's Ministry of Transport on Tuesday held a completion ceremony for the construction of a lighthouse on Zhubi Reef, marking the start of its operation.

Construction of the Zhubi Lighthouse was initiated in October 2015. The 55-meter-high lighthouse, with a lantern of 4.5 meters in diameter on the top and rotating lights inside, is monitored through a Beidou remote control terminal.

The lighthouse emits white light in the nighttime, with a light range of 22 nautical miles and a glowing cycle of five seconds. The automatic identification system (AIS) and very high frequency (VHF) stations inside the lighthouse can provide efficient navigation services such as positioning reference, route guidance and navigation safety information to ships, which can improve navigation management and emergency response.

The South China Sea is a critical maritime corridor linking the Pacific and Indian oceans, as well as a major fishing ground.

However, high traffic density, complex navigation condition, severe shortage in aids and response forces have combined to threaten navigation safety and hindered economic and social development in the region.

The Huayang, Chigua and Zhubi lighthouses help China better perform international responsibilities and obligations in maritime search and rescue, prevention and elimination of natural disasters, marine environmental protection and navigation safety, according to the ministry.