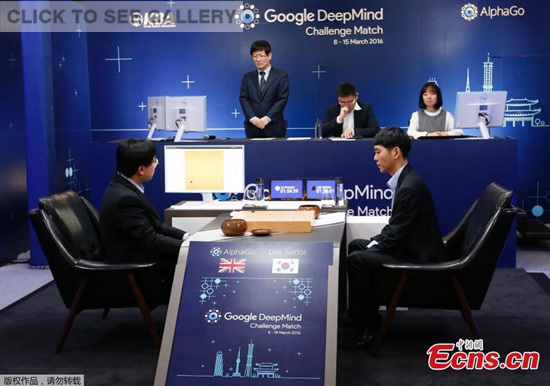 A "match of the century" between human champion of the Chinese board game Go and Google's computer program kicked off in Seoul on Wednesday, which drew great attention.

The first game of the five-game match started at about 1 p.m. local time (0400 GMT) at Four Seasons hotel in central Seoul. It will run through next Tuesday to determine the winner between South Korean Lee Sedol, the world Go champion in the past 10 years, and AlphaGo, developed by Google's London-based subsidiary DeepMind.

The match of the century drew great attention from news organizations, Go fans and the general public across the world as well as in South Korea as it is seen as a representative match between humans and artificial intelligence (AI).

The Korea Baduk Association, a body for South Korean Go professionals, had received advance applications for an explanatory event of the match, but the limit of 60 seats had already surpassed.

Cable channel TV Chosun will broadcast the match's development every 10 minutes on Wednesday and Thursday, while planning to air live the whole matches on Saturday and Sunday.

The match is being aired live through YouTube around the world, while various Internet websites and TVs are broadcasting the landmark match.

Hundreds of journalists from around the world gathered at the venue to report on the match between Lee and AlphaGo.

Lee told a press conference on Tuesday that he got slightly nervous ahead of the match, lowering his confidence in his victory as he got to think that AlphaGo can mimic intuition of humans.

Demis Hassabis, CEO of the DeepMind, said AlphaGo became stronger than in October as the algorithm has made many upgrades since then.

AlphaGo took the world by surprise as it defeated European Go champion Fan Hui in October last year. Some experts had predicted it would take decades of years for AI to defeat humans at the ancient Chinese board game.

Go, which originated in China more than 2,500 years ago, has been viewed as a grand challenge for AI due to its complexity and intuitive nature. It involves two players, who take turns putting markers on a grid-shaped board to gain more areas on it. One can occupy the markers of the opponent by surrounding the pieces of the other.