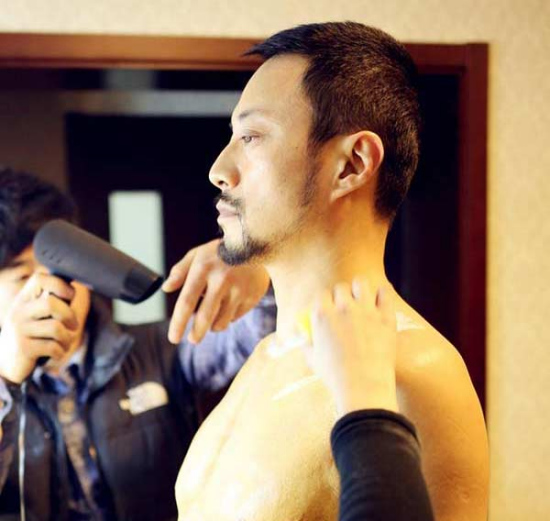 Special effects artists are pasting fake muscles on the chest of award-winning actor Zhang Hanyu so as to help him play the supporting role of Men Saner in Mr. Six. (Photo/Weibo)

While female movie-goers are blown away by the muscular tough guy in a current big-screen hit, it turns out that the muscles and scars they saw are all fake latex make-up, reported thepaper.cn.

Recently-released photos by the crew of Mr.Six show special effects artists meticulously pasting man-made muscles on the chest of award-winning actor Zhang Hanyu so as to help him play the supporting role of Men Saner, a gallant street gangster always ready for a fight and to help his fellows.

It was reported that it took Zhang six hours to put on all nine pieces of muscles covering arms, shoulders, chests, backs and belly each time before shooting and then two hours to strip them off after shooting. The whole set of artificial muscles cost a total of around 300,000 yuan ($46,230). 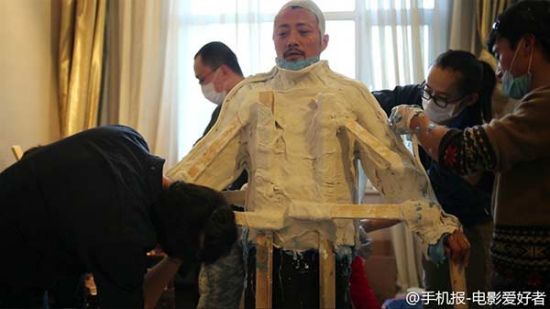 The special effects artists also painted scars on Zhang's chest and colored his skin bronze to make him look tougher in spite of the fact that 51-year-old Zhang already has a better-than-average body shape and muscles thanks to a rigorous workout schedule.

The film crew's attempt to show Zhang's dedication to his art in enduring the trouble and discomfort of putting on and taking off the fake muscles backfired, as audiences who had been attracted by his bronzed musculature were disappointed to find out it was fake.

People who opposed such trickery on the Internet felt their feelings were hurt, and questioned Zhang's professional ethics compared with other actors who worked hard to look more like the characters they were playing. 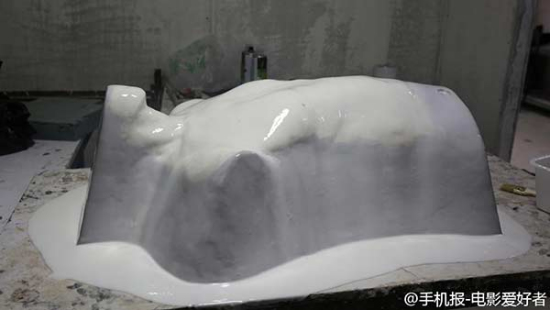 Four years ago when 48-year-old Hong Kong actor Nick Cheung played the part of a boxer in the movie Unbeatable, it took him nine months of hard exercise to develop his thin frame into that of a muscle man.

"Besides exercising for six or seven hours per day, I also needed to keep strict diet control. For some days I couldn't have salt, oil or sugar, but for some other days I need to eat two to 30 eggs per day to get enough protein," said Cheung.

41-year-old Hollywood actor Christian Bale, who played Batman, once lost 13 kilograms in order to star in The Fighter, which earned him an Oscar, and then worked to gain a bloated belly in order to play his character in American Hustle.

Zhang's supporters, however, say movie fans should be tolerant of Zhang's fake muscles. After all, many actresses use padded bras to make their breasts look bigger.

Starring Feng Xiaogang, a big name Chinese director known for commercially successful comedies, Mr.Six has garnered more than 200 million yuan at the box office since it was released on Thursday.