Over five years, squads on mainland to grow to 50, with 100 aircraft for law enforcement, expert tells forum 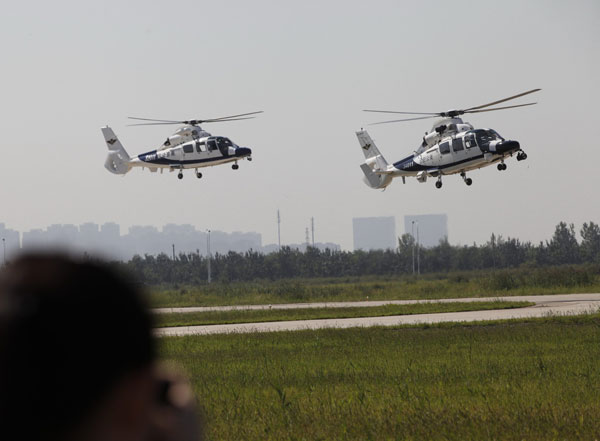 Police helicopters rehearse on Monday for the China Helicopter Exposition in Tianjin. The exposition will run from Wednesday to Sunday. (Photo by Jia Lei/China Daily)

Police authorities across China will double the size of their helicopter fleets within five years, according to a police aviation official.

Liu Daolin, deputy director of the Ministry of Public Security's police aviation management office, said there were 28 police helicopter squads in 18 provincial-level regions on the Chinese mainland, and they have a total of 47 helicopters.

"The size of existing police helicopter fleets is usually small and their operational capability is weak, leading to less than 10 percent of mainland cities being covered by police aviation," Liu said.

"Meanwhile, the police in many border regions still have no helicopter squads," Liu said at the 2015 China Helicopter Development Forum, which opened on Tuesday in Tianjin.

"Fortunately, heads of local public security departments have begun to realize the importance and usefulness of police aviation and have pledged to increase investment in the force," Liu said.

"According to our estimation, by the end of 2020 there will be about 50 police helicopter squads with nearly 100 helicopters on the mainland."

The helicopters used by these squads are AC311s and AC312s made by the Aviation Industry Corp of China, and some other types bought from foreign companies such as AgustaWestland, based in Italy, he added.

The first police aviation team on the mainland appeared in 1994, when the Public Security Bureau in Wuhan, Hubei province, founded a helicopter squad.

Since then, the police in large cities such as Beijing, Shanghai and Guangzhou have established their own squads and deployed helicopters on security patrols, search and rescue, and emergency response operations.

Some provinces that have no such squads, including Liaoning and Hunan, plan to establish police helicopter forces in three or four major cities to cover the whole province, Liu said, adding that 12 existing squads in other provinces will soon expand their fleets.

"Next, we will focus on helping police departments in central and western regions set up their aviation teams," he said.

The Ministry of Public Security has been cooperating with Civil Aviation Flight University of China, in Sichuan province, to select and train police officers as helicopter pilots since 2009.

The ministry is also working with the Government Flying Service in Hong Kong.

In addition, starting in 2013, selected helicopter squad officers have been sent to the United States to receive training in tactics, Liu said.

He also said there are currently around 300 unmanned drones used by 150 police authorities in 25 provincial-level areas on the mainland. Most were bought within the past two years.

"We estimate the number of police drones on the mainland will reach 1,000 before the end of 2020," he said.