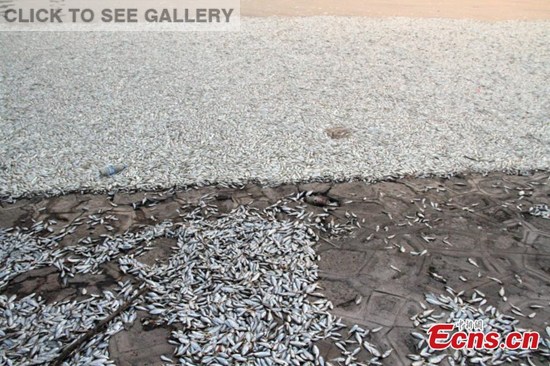 Heaps of dead fish are spotted pilling up near the shores of a lake in Tianjin on August 20,2015, some six kilometers from the site of the blasts that ripped through a warehouse storing hazardous goods in the port city's Binhai district.(Photo: China News Service/Zhang Daozheng)

No toxic levels of cyanide have been detected in water samples taken from a Tianjin river where a large number of dead fish were spotted after last week's explosions.[Special coverage]

The analysis was conducted at around 5:30 p.m. Thursday at a section of the Haihe River, which is several kilometers away from the site of the explosions at the north China port, according to the city's environment monitoring center.

Responding to questions on the death of the fish at a press conference at 4 p.m., Deng Xiaowen, the center's head, said an investigation would be launched but assured that is was not uncommon for fish to die en masse in local rivers during summer, due to poor water quality.

Last Wednesday night, two explosions ripped through a warehouse in Tianjin where hundreds of tonnes of toxic chemicals were stored, including roughly 700 tonnes of sodium cyanide. So far 114 people have died hundreds are still in hospital and 69 are still missing.