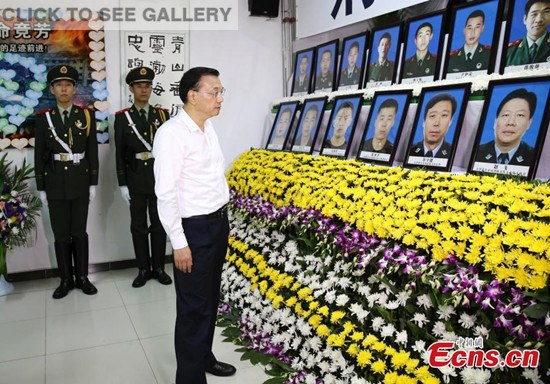 Premier Li Keqiang pledged on Sunday a thorough investigation into last week's fatal blasts in Tianjin and promised that those responsible would be punished. [Special coverage]

After arriving at the scene of the explosions near Tianjin Port to direct rescue work, Li said a central government investigation group had been set up.

The area is still considered dangerous and has been sealed off from the public.

As of Sunday, at least 112 people had died in the blasts at a warehouse storing dangerous chemicals in Tianjin Binhai New Area. Another 95 remained missing, including 85 firefighters.

Li said the government will investigate the incident thoroughly and punish those accountable. Those who failed to perform their duties and are suspected of dereliction of duty must be investigated.

"Only in this way can we act worthily for the residents and firefighters who died in the incident," he said.

The explosions, which caused the highest number of casualties among firefighters in a single incident in China, have left rescuers with an unprecedentedly complex situation, as dangerous chemicals are still at the scene and the explosions occurred in a number of places.

The Supreme People's Procuratorate, the country's top prosecuting authority, said on Sunday that it had started an investigation into the blasts to see if any illegal acts, such as abuse of power or dereliction of duty, were involved.

To date, no officials or the company handling the warehouse－Ruihai International Logistics Co Ltd－have been held accountable for the explosions.

During the inspection visit, Li asked for continued search and rescue work to find those missing and for the best possible medical care for the injured. He also said environmental index figures must be released accurately, quickly and transparently to assure the public.

"We have to assure the public, not only by words, but with facts and statistics," he said.

At a temporary hall of mourning set up near the scene of the blasts for firefighters who died during the rescue work, Li paid tribute and bowed three times to pictures of the victims.

"The departed firefighters, no matter if they were armed soldiers or contract workers paid by local companies, must be treated equally with the same burial treatment, honor and compensation," he said.

Most firefighters in China are soldiers on active service, although some nonofficial firefighters are hired by companies at terms less favorable than those offered to the official workers.

Among the 85 firefighters missing, at least 73 are contract workers employed by Tianjin Port Co Ltd.

During a visit on Sunday to a temporary resettlement area near the scene of the explosions, Li promised that the government will cover all medical fees for those injured.

Rao Congping, 40, a construction worker from Sichuan province who suffered leg injuries, talked to the premier. He said he is grateful to the firefighters who saved him.

The Supreme People's Procuratorate announced on Sunday it has begun to investigate whether there is any dereliction of duty involved in the explosions.

As of Sunday, no officials nor the company handling the warehouse of Ruihai International Logistics Co. Ltd, has been held accountable for the explosions, but the procuratorate said it will look into possible illegal acts, such as abuse of power or dereliction of duty and deal with those acts which may constitute crimes.

A Saturday commentary published by the newspaper affiliated to the top anti-graft watchdog said industrial tragedies revealed loopholes in China's law enforcement, urban planning and supervision, as it went on to question why several communities of over 5,600 households were located within 1,000 meters of the warehouse for dangerous chemicals.

"Until the moment of the explosions, the communities' developers and residents did not know they had lived right beside a 'volcano'," the commentary said.