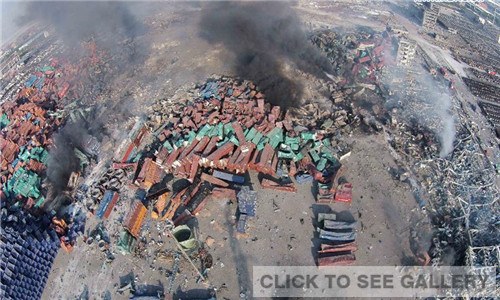 Fires after massive warehouse blasts in the northern Chinese port of Tianjin on Wednesday night are now "under initial control", but 18 firefighters are still missing, the Ministry of Public Security has said. [Special coverage]

Six firefighters killed on duty have been identified, and another 66 wounded have been hospitalized, the fire command center under the ministry said on Thursday in a statement.

According to the ministry, the department is still battling blazes by spraying dry powder and burying areas in sand.

The latest death toll rose to 44, with at least 21 still missing. The Tianjin fire brigade said it has sent 1,000 firefighters and 143 fire engines to the warehouse, which contained dangerous goods.