Road over water to be truck-free zone 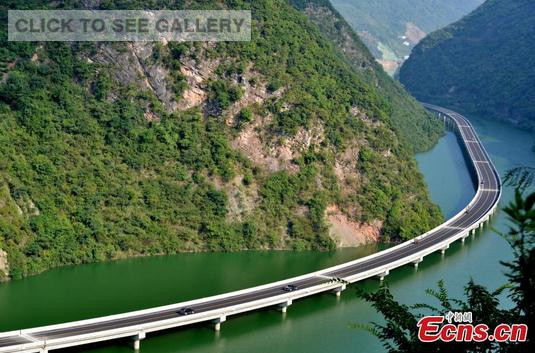 A stretch of road 4.4 kilometers long and running above the Three Gorges Reservoir area opened on Sunday, with the management authority pledging strict restrictions on vehicles in a bid to prevent the water becoming polluted.

The section is part of the road connecting Gufu township in Xingshan county, western Hubei province, to a major provincial expressway. The road runs 10.5 km in total, and building began in 2012, according to a statement from the county. It is hoped that the road will promote the county and attract more tourists, the statement said.

To reduce the risk of polluting the river, construction was conducted in low-flow season from May to September, with all construction waste removed immediately, said Chen Xingda, deputy head of the county's transportation bureau.

Only passenger buses and small vehicles are allowed to travel on the section that runs above the water. Trucks have to use the old roads nearby to reduce the danger of pollution and protect the beautiful road and environment, he added.

The road is built over the Xiangxi River and the reservoir of a local hydropower station, both part of the Three Gorges Reservoir region. It is bordered by green mountains, and, according to some netizens, is the most beautiful road over water in China.

However, the winding road comes with a big price. Built with one section above the water, it cost 440 million yuan ($70 million), almost double the price for a traditional road with tunnels drilled through the mountains.

"The higher price has protected the vulnerable environment and reduced damage to the forest and water, which makes our investment worthwhile," said Tan Yeming, Party chief of the county.

If the county had decided to carry out controlled explosions to build tunnels through the mountains, the construction area would have been more than 100,000 square meters and would have narrowed the river area, said Yu Hongshan, head of the road project.

The smaller the area affected by the construction, the better the environment can be protected, he said. The construction area for building part of the road over the water was 60,000 square meters.

Xu Jintao, a professor at the College of Environmental Sciences and Engineering of Peking University, said: "It's better to build the road than carry out deforestation, which would cause irreversible damage to the environment."

The environmental impact assessment for the project had said there were potential risks of polluting the water under the road in several ways, according to the website of the provincial Environmental Protection Bureau.

Untreated sewage on the road after rainfall and sewage produced from the facilities along the road may cause direct pollution to the water, it said, adding that if trucks were allowed to use the road, those carrying dangerous chemicals could pollute the river if they were involved in an accident.