This composite photo shows Kubuqi Desert in the past and the present, spanning 20 years. (Photo provided to chinadaily.com.cn)

A company has spent the past 27 years in combating desertification in the Kubuqi Desert, with the tenet of perseverance rather than seeking quick success, and has turned more than 6,000 square kilometers of the desert into green lands.

Elion has rapidly transformed from a traditional desertification control company into an ecologically sound business featuring "Green land, green energy, green finance plus Internet" to promote the land, air and environmental restoration since 2011.

In an interview with China Daily Website, Elion's Founder and Chairman Wang Wenbiao said that what Elion has achieved is to make ecological protection financially viable.

He explained that Elion has been pursuing a sustainable green development path ¨C hoping to bring public benefits even as it seeks to business profits.

The selected plants thrive in the tough environment and can be sold for a large profit. Meanwhile, these plants can slow down the process of desertification and gradually transform the desert areas into arable lands.

The governance of the desert not only makes the natural environment better, but cultivates industries to improve the lives of local herdsmen through practices such as desert restoration, ecological animal husbandry, ecosystem health, ecotourism and ecological photovoltaic. 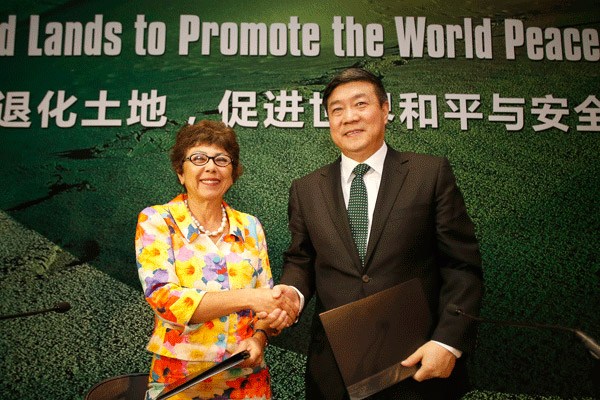 The UN Convention of Combating Desertification (UNCCD) and the China Elion Foundation announces a partnership to plant 1.3 billion trees along the Silk Road in 10 years to combat land degradation and climate change in Sydney at the 6th World Park Congress on Nov 18, 2014. (Photo provided to chinadaily.com.cn)

"Poverty, war and social problems are common in desert areas, and the source is poverty," said Wang. "When the problem of desertification is improved with tourism and industrialization, residents will benefit."

The biggest genetic resources center in western China was established by the company with decades of experience, which contains more than 1,000 plant seeds, 100 technological achievements and 100 desert ecological process packages. The center provides the technical expertise to reestablish greenery not only in the Kubuqi Desert, but also in western China and the Silk Road economic belt.

Kubuqi has become a model for the global community to learn from in terms of degraded land rehabilitation and addressing climate change. Its innovative practices emphasize harmony and balance between the ecosystems, the economy and the people, said Monique Barbut, executive secretary-general of United Nations Convention to Combat Desertification.

The 2015 Kubuqi International Desert Forum, the fifth of its kind, will kick off on July 28 in the Kubuqi Desert. The forum is the only international forum dedicated to the development of the world's desert ecological civilization and the first international desert forum in China.

Deserts cover nearly 40 million square kilometers of Earth, accounting for a quarter of its land surface. More than 110 countries and about 1 billion people around the world have been affected by desertification.

Wang stressed that while Elion's success could not be fully replicated due to the different conditions in various desertification areas, people can still learn a sustainable way of controlling deserts from his company's technology, spirit and concepts.

"The forum will be a platform for technological communications, government and commercial dialogue and investment," Wang said, "China is winning the discourse on desertification control."